Why arm the bombs early?

This question is about Star Wars: The Last Jedi so I'm making sure the preview on the main page is spoiler-free.

In Star Wars: The Last Jedi, the bomber fleet (squadron?) arms their bombs long before reaching the primary target.

We see that arming the bombs only takes a few seconds. We also see that

arming the bombs makes the fleet extremely vulnerable, as all but one of the bombers is destroyed in a single chain reaction.

Given this, why did they not delay arming the bombs until just before they were ready to drop them? Wouldn't that have been safer and more likely to be effective?

It's a way to put a plot event in terms that an early 21st century moviegoer can quickly understand. Unfortunately, they sort of missed with that one... doesn't really stand up to even cursory examination.

You might even ask - why didn't they have automatic bomb arming devices? During WW2, bombs had automatic armers, wires that got pulled out when the bombs were dropped, releasing a small propeller that spun in the airflow and completed the arming after the bomb was well clear of the aircraft. Otherwise, a fragment from an exploding AA shell or bullet from an attacking fighter could hit the fuse and touch off the bomb while it was still in the aircraft.

Note that bombs contain high explosive, the 'high' indicating that a high amount of impact force is needed to set the explosive off. It's a safety measure, so you don't get a boom until you really want one. Even a bullet or shrapnel fragment won't set off high explosives, only a blasting cap or other device capable of creating a shock wave, can do that.

One exception in WW2: The detonators for the atomic bombs were not even installed until the bomber was well clear of Tinian island, the thought being that if something went wrong and the bomb blew when it went through the first stage of activation, they didn't want to take out their main bombing base.

One other exception: the kamikaze vehicles, both aircraft and the Kaiten manned torpedo, had manual arming methods, because the bomb never left the vehicle.

Presumably, the fleet, working with technology far in advance of ours, would have solved that issue for the same reason it was solved during WW2 - early arming means higher chance of premature detonation due to the enemy shooting at you and maybe hitting a bomb... as the fleet discovered, much to it's discomfort.

The alternative to that storyline would have been to come up with a plot that had the fleet obliterated for reasons that a moviegoer might struggle with... like maybe some sort of super weapon that a contemporary viewer might not understand.

An example of dated thinking evident in sci-fi: If you go back and view 2001: a space odyssey, you will find a few things that were clearly the result of a 1968 frame of reference: the video phone being a station and not a pocket phone, for example. That can be understood - even the concept of a cell phone didn't exist in 1968. (otherwise, that film was remarkably accurate, even with what we know today)

This one, though... a rare slip-up when they should have known better.

As I've pointed out in another related question about the bomber's tactics, the bombs weren't armed until the bombers were directly over the nose of the dreadnought, their primary target. 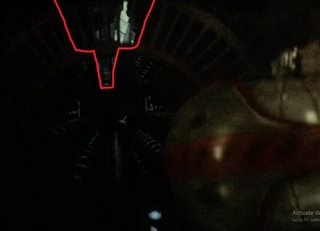 Presumably some of the bombers were going to drop their bombs immediately, with some waiting a few seconds longer in order to get the maximum impact and maximum spread.

It wasn't until there was only one bomber left that they decided to hold fire until they were directly over the centre of the ship, hence the delay.

To ensure the bombs work. Otherwise you are dropping the equivalent of a large rock. Which is obviously a waste of money and resources, and potentially a waste any lives spent making the bombing run.

Bombs themselves are not very explosive without the detonator. The reason being exactly what you mentioned in the question, arming the bomb makes things extremely dangerous (there are a few exceptions, but not with military grade explosive).

The military tries to make its explosives as durable as it can, since you don't want soldiers blowing up from the impact of a single bullet. A block of C4 plastic explosive can withstand a rifle shot without exploding. You can even set one on fire without too much worry.

Such a bomb would have a detonator, which is far more vulnerable. The detonator serves as a mini-bomb that produces enough energy to blow up the main explosive. Here's how it works: A power source—usually a few batteries—provides an electrical charge that sets off a tiny explosion in one part of the detonator. This sets off another, somewhat bigger charge, which in turn ignites the payload
If you shoot a bomb, will it explode?

So the trade off between carrying highly explosive objects and dropping rocks is keeping them unarmed until just a moment before the drop. They then have a moment to arm everything make sure they are, in fact, going to explode. It's the middle ground between being safe and effective.

38
How did bombs fall into the Dreadnought?
29
Why did the Resistance bombers fly this way?

5
Why didn't Laurita Tohm get a prosthetic arm?
26
How were Anakin, Obi-Wan, and Palpatine physically trapped by a ray shield?
8
Why did the criminals show up early?
25
How does the math add up in the success of Order 66?
2
Did the Alliance and the Empire ever fight a common enemy outside of Shadows of the Empire?
38
How did bombs fall into the Dreadnought?
36
What's with Luke's arm?
22
Did Darth Sidious ever intend for Darth Vader to kill him and take his place?
4
In the movie The Last Jedi, why didn’t the dreadnought ship go in reverse so it wouldn’t get hit by the falling bombs?
4
How capable are Y-wings and B-wings for taking down a First Order Dreadnought?