Are there other artwork foreshadowings in "My Little Pony: Friendship is Magic", like the one in the pilot?

My 5 year old daughter showed me this while we were re-watching the pilot episode of My Little Pony: Friendship is Magic. 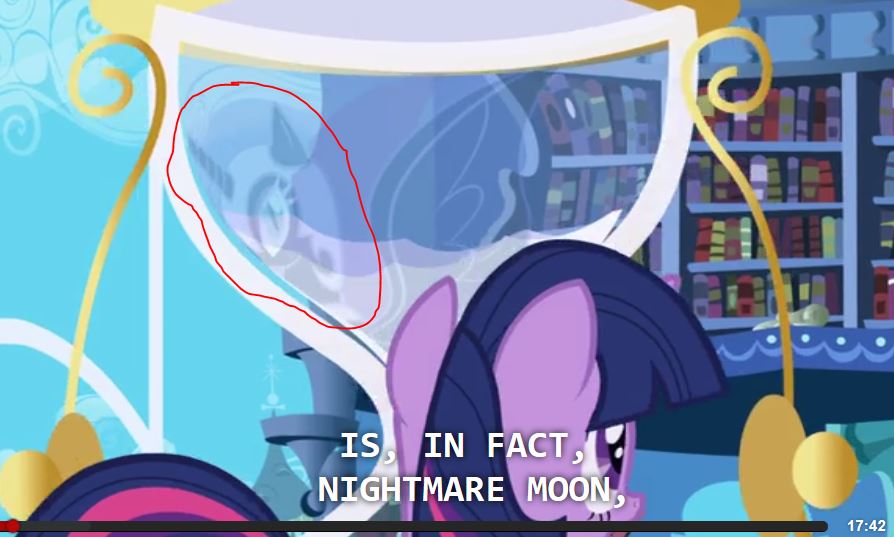 This is very early in the episode, and long before the "bad pony" has been introduced.

Are there other foreshadowing pictures such as this before they are introduced in the episodes?

Yes, they have done this multiple times. Some examples, in random order:

Season two, premiere: When Discord appears on the window, he touches one of the ponies figure on the head. He actually touches Fluttershy, the only one he has to actually touch on the forehead to turn "evil" later in the episode.

Season three finale, season four premiere:
Did anyone notice how Twilight Element of Magic trinket was the only one shaped like a tiara instead of a necklace? Also, as Ajedi32 pointed out, the results of this episode is the culmination of a path Celestia hinted multiple times in previous episodes (for example, at the end of season 3 premiere while Celestia is talking to Luna you can see a book that will become very relevant in this episode).

Season four, five episodes: In the five of the episodes where the Mane Six obtain the first five of the six keys to the tree chest, the identity of those keys are foreshadowed. At the end of each of those five episodes, right before the end credits start, the camera makes an extreme closeup to a small object that will be revealed as one of the five keys in E25, and a moving pale rainbow reflects on the object. To make this more obvious, a short instrumental music theme tune that is used only in S4 is heard during these closeups. The same pale rainbow shows up earlier in the same five episodes, shining in the eyes of one of the Mane Six right when they make some important decision. The five episodes are S4 E8, E10, E12, E16, and E20. Screencaps of Pinkie Pie's key is shown below, from E10.

Season four, finale:
Discord basically beta-tested the "I give you this necklace as a sign of friendship" scene in a previous episode, to the point fans are still arguing if during the finale he was acting with the only purpose to replicate that scene.

Season five, multiple episodes:
In the season five finale, a character from the premiere comes back, seeking revenge. The same character can be seen during two episodes (E12 and E22) hiding in the background, spying on Twilight Sparkle.

Season 6, Ep 2:
As this question states, during the ending sequence you can see a black creature "something" over the Crystal Empire. (credit to the original question for the image) 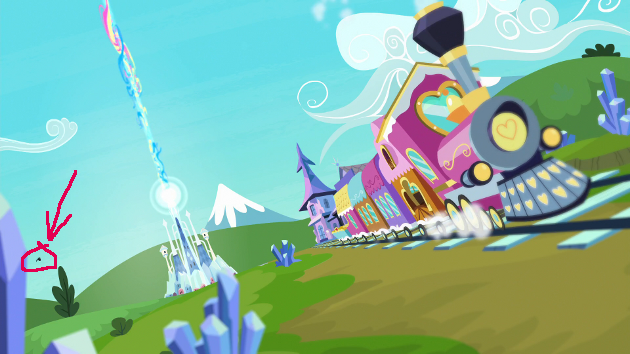 In episode 16 we discovered a "reformed" changeling has been spotted near the city. So, he probably was the shadow figure at the end of episode 2.

Season seven, episode 20:
The mage Fluttershy and Twilight are searching for was mentioned in previous episodes. It is questionable if this is indeed foreshadowing or just name reuse. Probably the second one.

Season seven, finale The premises for the episode were set back in Castle Mane-ia

These are the most evident ones I can think of right now.

Mind you, there are multiple other smaller references that one may notice, for example and many of them are still open for discussion:

10
What is the speck moving in the sky in the very last scene of My Little Pony: FIM S6 E2?