I remember a book read around 2016/2017. It's about a girl trapped in a VR game where she is a character. The VR game has real humans in it controlled by chips in their brain. The girl became sentient and followed a boy who had broken in wanting to break out (In the game there are cannibals and there are characters who have to survive those cannibals). In the end, the girl realises that the game was actually at an abandoned part of the real world and that there were different sections, based on what mental disorder the players had. The players were kids who were rich and identified to have DNA strains that were deemed to make them be killers/psychos etc when they grew up. All the players were rich as only they could afford to play. Both players and characters had the "bad" dna. The characters were just the poor who did not have enough money to be the players. The version of the book that I read was completely pink sort of neon. Would love to know the title of the book. Thanks.

Could it be Under the Never Sky, the 2012 book by Veronica Rossi? The cover is not completely pink, but it is very pink. 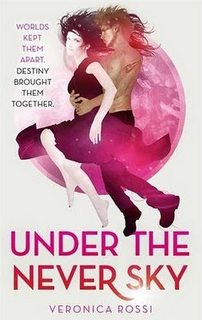 This Kirkus review mentions that the main character is female, lives in a VR world, meets a boy, and encounters cannibals.

Aria comes from a world of virtual reality, where even fear is a synthesized emotion. When her fellow Pod-dwellers strike a vein of madness, Aria finds herself thrown out of the safety she knows and into The Death Shop, the dangerous, uncontrolled world outside the enclosed city of Reverie. There she meets a volatile Outsider named Perry–a fighter and a hunter, warring with his eldest brother for Blood Lord of the tribe. Together they navigate dangerous Aether storms, confront cannibals, and try to unravel the mystery of two disappearances: Aria’s researcher mother and Perry’s young nephew.

I picked up Under the Never Sky for my monthly Girls’ Night Book Club, so I’ve combined four opinions into one for the purpose of this review. Each of us found different things to love about this novel: the Outsiders’ enhanced “senses,” such as Perry’s ability to smell emotions quite vividly; the “fantasy” sub-genre that emerges as the characters quest across the Death Shop’s landscape; and the frightening realism of the cannibalistic Croven. Rossi paints her dystopian world with poetic detail, and never falls into the trap of letting her world-building distract from the narrative. Her prose is masterful and quick. The story never sags, even in the throes of the second act, where many dystopian fairy tales wind up after the novelty of the concept has worn off.

From a brief combing of the electronic copy of the book from my library, the details are a bit different from your recollection. Aria lives in the real world, in a domed city, but people largely view life through an augmented reality projected onto "Smarteyes". Aria and a few of her friends deactivate their Smarteyes so that they can explore Ag 6, a hydroponics pod which was damaged by "Aether Storms". There, one of her companions, Soren, son of the overseer of her pod, starts a fire and then assaults her. She is rescued by an Outsider, Peregrine, one of the "cannibal savages" that live outside of the domes, with the only other survivor from the exploring group being Soren, who is much worse injured.

As noted above in the review, the book alternates between Aria and Peregrine's perspective as they wind up thrown together, learning about each others' societies and the dangers therein. The cannibals outside do exist, the Croven, the result of those outside abandoning themselves to animal instinct, but there are also bastions of civilization, outside of the domes and not under their authority. Complicating matters, halfway through the book, Aria is attacked by the Croven and, in defending her, Peregrine sets off a blood feud. Those outside the domes have developed abilities, with the strongest named Scires. Peregrine can smell emotions. His friend, Roar, can hear well enough to pick up thoughts on close contact. Some have been even more weirdly mutated by the Aether storms, such as Cinder, who can wield fire. While they attempt to survive contact with the Croven, Aria learns that there is something darker behind the pods going down, not technical difficulties or damage caused by the Aether storms, but rather violence and psychosis causing the people within to tear each other apart.

The violence and psychosis (and eventual murder and cannibalism) in the domes is not due to an initial genetic propensity, but rather due to something they call "Degenerative Limbic Syndrome", explained as a consequence of living most of their life without pain or stress, resulting in an inability to handle instinctive behavior when it does kick in.

"Simply put, this is our animal mind. Over generations in the Realms, the usefulness of this part of our brain has vastly diminished. What do you think, Daughter, happens to something that goes unused for time too long? .... It degenerates. This has catastrophic consequences when we do need to rely on instinct. Pleasure and pain become confused. Fear can become thrilling. Rather than avoid stress, we seek it and even revel in it. The will to give life becomes the need to take it. The result is a collapse of reason and cognition. Put simply, it results in a psychotic break."

Not the answer you're looking for? Browse other questions tagged story-identification novel soft-sci-fi dystopia or ask your own question.

6
VR arcade game teaches teenagers to live on another planet
7
Book with virtual reality plot
23
Trying to find the name of the movie where young men entered a cyber world and meet a girl with pink hair
20
Looking for a sci-fi movie about people who have to play a game to obtain a life-prolonging drug
14
Book about a kid who gets sucked into his computer game
5
LitRPG book with the main character “trapped” in VR MMO world, manages to re-invent tobacco as a crafting recipe, serves a “dark” god
6
Book about a kid who gets recruited into a think tank via computer game