Looking for the title of a full length novel. The main character was in a research station and was subject of nanotech experiments that could cause deformity and death. He escapes and ends up with an advanced star ship piloted by an AI. The research station is destroyed and everyone thinks the protagonist is killed. At the end of the book he has become a smuggler.

One Jump Ahead by Mark L. Van Name

The main character was Jon Moore and his ship was a Predator Class Assault Vessel.

Jon Moore: A nanotech-enhanced warrior who wants nothing more than a quiet life and a way back to his strange home world. Lobo: An AI-enhanced Predator-Class Assault Vehicle, a mobile fortress equipped for any environment from the seabed to interstellar space. TWO WOLVES IN A GALAXY OF LARGER PREDATORSJon Moore wanted only to relax on the pristine planet of Macken--but Macken was the secret battleground of two megacorporations, both determined to control the local jump gate and the riches of an undeveloped world. Moore was too valuable a tool not to be used, whether or not he was willing. What the corporations didn't realize was that Moore had a mind of his own and a conscience that wouldn't let him quit until he'd righted the wrong they'd tricked him into making. And Moore had Lobo--or just possibly Lobo had Jon Moore, because this Assault Vehicle had a mind of its own. . . .

Finding allies and enemies among terrorist groups and elite mercenaries, gun-runners and the only kind of government possible on a frontier short on rules and long on riches, Jon and Lobo fight to a climax with a corporate army that can't afford to leave any witnesses. Exotic settings, fast action, real tech, mechanically-enhanced animals--and a beautiful woman who's as deadly as a cobra!
Synopsis from Goodreads 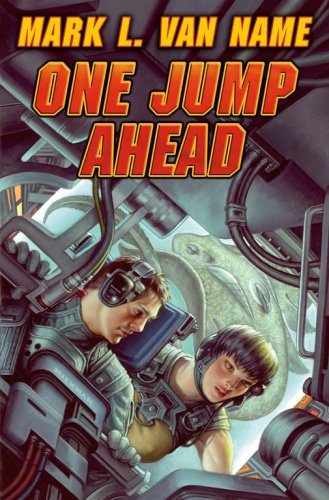 15
2000s fantasy book with a red-haired protagonist meeting companions from her previous life, including a troll
7
Story identification- Written by a black female author: a kid in a PA future escapes a facility, we read it as his diary?
9
Early 2000s - murder mystery involving matter transmitter
13
novel identification: alien scientists must save their civilization from future destruction
7
Trying to identify novel with a man imbued with uncontrollable telepathy
11
Horror/SF novel - keratin-eating alien
5
Dystopian story about a Man searching for his son in a camp for people with an illness