What happened to Luke's green lightsaber?

When Luke goes to pay his nighttime call to Ben he uses his green lightsaber as a night light but it appears to be too bright and loud and so wakes Ben up. 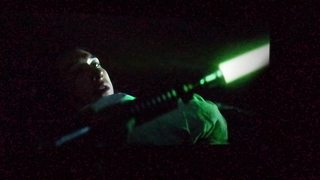 Throughout The Last Jedi I can't remember Luke having his green, or any, lightsaber with him.

Do we know where this lightsaber has gone?

The last time we see it is when

Luke and Ben fight at the school.

This leaves a number of possibilities:

And a couple that give away the above spoiler.

The movie does not indicate one way or another.

In the climactic showdown,

uses a blue lightsaber, which we are to assume was his recovered one.

The ultimate fate of Luke's green lightsaber (first seen in Return of the Jedi and last seen in his hands prior to his falling out with Ben) is unknown, but it is most likely either on the island where Rey found him or near the ruins of the school he built.

Not the answer you're looking for? Browse other questions tagged star-wars lightsaber the-last-jedi or ask your own question.

28
Why did Luke use a synthetic crystal in his lightsaber and what were the implications of this choice?
13
Why didn't Luke kill the Emperor after subduing Vader?
29
When does Luke's lightsaber first appear in the Star Wars saga?
33
Did Obi-Wan ever pay Han Solo? If so, where did he get the money?
4
Did Luke have this necklace in his hut on Ach-To?
14
Did Leia know that Luke wasn't really there?
4
What is the meaning of this character hovering in the last jedi?
44
Why does Luke vault across the canyon when fishing in The Last Jedi?