Did Luke have this necklace in his hut on Ach-To?

I've just read an article that claims the following.

When Luke holes himself inside his home, fans get a glimpse of his surroundings where they see a makeshift necklace hanging from the wall. The necklace appears to be a section of a destroyed lightsaber, with a red crystal fixed at the center.
Based on this appearance, it looks as if Luke has kept a portion Darth Vader's destroyed lightsaber as a keepsake, as a reminder of his fateful confrontation with his father that changed the fate of the galaxy.
'Star Wars: The Last Jedi': Was That SPOILER In Luke's Hut on Ahch-To?

I've only seen the film once and I'm not that eagle eyed so missed what was inside of Luke's hut.

Was there a necklace that contained a portion of Darth Vader's lightsaber?

This necklace is identified in the Last Jedi Visual Dictionary as an ancient Jedi artefact belonging to something called a Jedi Crusader, presumably the Jedi that were tasked with hunting down and killing the Sith during the Sith Wars.

As far as can be told, this isn't the crystal from Vader's lightsaber (which we last saw tumbling into the heart of the Death Star II). 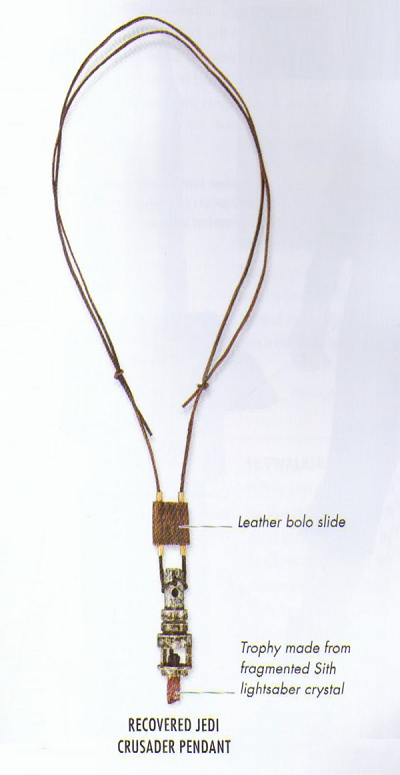 Luke's search for Jedi lore led to him uncovering many lost relics, which he collected and brought with him to Ahch-To. Key to finding the island itself was studying the spread of uneti saplings, a rare type of tree that is sensitive, in its own way, to the Force.

In Star Wars history, Sith and Jedis alike would take the kyber crystals of fallen opponents, much like General Grievous would take the lightsabers of fallen Jedis'. During the Jedi Crusades, stolen kyber crystals would be converted into jewelry or tools to respect the fallen Sith/ Jedi warriors. In a cutscene during Battlefront 2, we see Luke Skywalker, now highly intune with the Force, just after the Battle of Endor go to an old base for Emperor Palpatine, and take a Jedi Artifact (a hyperspace compass), so we can assume he does the same for the 30 years between then and the Force Awakens. It could possibly be Darth Vader's crystal, but for all we know, it could be Joe Schmo's crystal too. It stays unknown.

138
How many times was Obi-Wan less than honest with Luke?
27
Is Anakin's lightsaber the only one remaining from the 'Clone Wars' era?
4
How does Maz know this?
13
Was Darth Vader's lightsaber on the wrong side to stop Luke from killing Palpatine?
22
Did this person deliberately stop Luke from finding out something important?
12
Did Luke really shut himself off?