Why did the Resistance bombers fly this way?

In the opening sequence of The Last Jedi, we observe

a squadron of Resistance bombers flying in fairly close formation towards the First Order dreadnaught. Arguably, the bombers arm their ordnance quite prematurely and fly irresponsibly close to each other, the result being that when one ship is destroyed it practically wipes out the whole squadron.

So my question is:

Why did the Resistance bombers fly in such close formation and arm their bombs so early?

EDIT: I don't see this as a duplicate of Why arm the bombs early? because this question primarily addresses the flying formation of the squadron.

The question of why they're so close to each other is dealt with in the Last Jedi: Incredible Cross-Sections factbook. In short it's because they rely on overlapping fields of fire to prevent small fighters from getting too close, using much the same tactics as bombers in our own galaxy.

Bombers are slow and ungainly, leaving them vulnerable to enemy star fighters during attack runs. For protection, they depend not just on fighter escorts but also on each other. Resistance flight instructors teach bomber pilots that it is essential to fly in a tight formation, opposing attacking fighters with overlapping fields of fire. The rear and ventral turrets offer a potent defence against attackers approaching from below or from the rear, but are less effective against threats from above or in front of the bomber squadron.

The bombs themselves weren't armed until the bombers were directly over the nose of the dreadnought (pictured below) and were within mere seconds of being dropped. It was just bad luck that this happened at almost exactly the same time as a TIE wing ploughed through the bomb bay of one of the bombers, causing a chain-reaction. 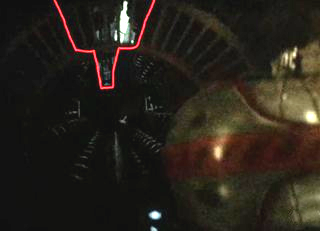 38
How did bombs fall into the Dreadnought?
15
Why arm the bombs early?