Fantasy book about a girl who eats her mother's sin, and then travels with a menagerie of animals [duplicate]

Looking at someone else's question, I had this book come to mind all of a sudden. I read it somewhere in the 1998 to 2002 timeframe while I was in Dayton, OH (probably 1999-2000 because I vaguely remember that the snow storm the day I read it shut down my Intro to Religion class, which I took in that timeframe). It was a paperback book, probably from one of the main publishers like DAW or Baen. It showed a girl on a mount, I think a horse, with animals also riding with her. I believe she was in a dress, maybe riding side-saddle. There might have been a decrepit knight (old, armor badly fitting, drooping lance) on the cover as well.

What little I remember of the plot was that the girl's mother died. A piece of black or brown bread was placed on her chest as she died and the daughter ate the piece of bread to consume her mother's sins to ensure she'd go to heaven (pretty standard "sin eater" plot point as per the Medieval practice) with the idea that she had her life ahead of her to atone for those sins. For some reason, she leaves the village immediately afterwards, accompanied with a bunch of animals that she could communicate with. The only one I recall distinctly (and she might have picked it up during her travel) was a turtle or tortoise (probably the latter). I mainly remember that because somewhere near the end of book, she's obtained her goal (which I don't remember what it was) and the tortoise has found a mate, and there's a description of the loud clacking that ensued as the tortoises mated and their shells collided.

I think maybe the half-remembered knight was a plot point, someone she met on her travels and accompanied her. Maybe he wound up as her romance? That part is a lot vaguer in my head.

I think this could be Mary Brown's Pigs Don't Fly

It's the second in a series.

When her mother dies, Summer sets out on a journey, without much direction, until she starts accreting companions: a scruffy dog, a blind, amnesiac, but gorgeous knight, a broken-down horse who claims to be a princess (not a human in horse form, a princess of horses), a homing pigeon with a broken wing, a tortoise who's a long way from home, and a weird little pig with wings. Thinking herself in love with the knight, Summer tries to help him regain his memory and his home, and in the journey helps the others find what they're looking for as well. But she doesn't discover what she wants until it's too late. 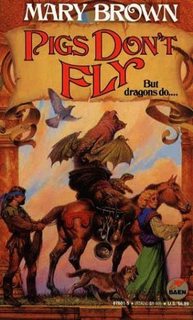 "What about a sin-eater?" said the priest suddenly. "She died unshriven. Masses for a year and a day might do it, but ..."

More money. "There isn't one hereabouts," said the mayor worriedly. "I suppose if we could find someone willing we should have to find a few more coins, but--"

But no one seemed very sure, even the priest. In the end he suggested I take a hunk of bread, place it on my mother's chest and pray for her sins to pass from one to the other. Then I had to eat the bread.

3
A fantasy book about a woman who can speak with animals and is taken by the prince?
14
2000s fantasy book with a red-haired protagonist meeting companions from her previous life, including a troll
6
90's movie about an alien teaching a girl special powers and then rescuing her
4
Book about a girl who could talk to animals
6
Fantasy book: redhead girl talks to animals, is made to stay with her noble father, discovers she's part of a phoenix rebirth cycle
4
YA Book involving a girl who acquires a book of mystic lore, trapped in alternate world with scarecrows, saved by her mother's watch