How did Harry and Ron find their way back to the tent after destroying the Locket Horcrux?

The tent was protected by enchantments making it invisible to anyone outside a certain range, right? But when Harry followed the Silver Doe Patronus deep into the forest he probably left the range of the protective enchantments and hence should not have been able to see the tent when he arrived back with Ron, isn't it? However, they simply walked their way back to it somehow.

At first I thought that Harry must have remembered some landmark, like a tree or something, and simply walked back in its general vicinity until he eventually walks into the protective charm and sees the tent. However, only just a few months ago when Ron left, he knew where the tent was (besides the salmon river), but when he wanted to come back immediately he couldn't see tent anymore.

How do those protective enchantments work anyway? Maybe say there is a 50-meter dome of invisibility around the tent, nobody can see the tent outside that, what happens then if someone simply happens to walk into that radius, will they suddenly be able to see it? I thought of the Quidditch World Cup and how they said some muggles would happen to walk in and they'd have to alter their memories.

The canon doesn't say much (and I couldn't find any JKR notes on this):

But it was not difficult. Though the walk through the dark forest with the doe had seemed lengthy, with Ron by his side the journey back seemed to take a surprisingly short time. Harry could not wait to wake Hermione, and it was with a quickening excitement that he entered the tent. Ron lagging a little behind him.

So they were NOT guided by the Deluminator, at least as far as the book goes, and seemingly Harry just knows where to go. There are 4 possibilities I can think of, none backed up:

I never really saw this as an issue; Harry was within the confines of the spells when they were cast, and my assumption (that seems consistent with what we see) is that the spell has no (or an irrelevant) effect on those within the boundaries when it was cast. (Much the way people are allowed to remember what happened in another timeline by having 'been at the heart of the change' or some such.)

I always read it as functioning in a way that is similar to many optical illusions; people who don't know what they are seeing are influenced to see things differently.. but those who HAVE seen it can't unsee it. Harry, being within the area that the spell was cast, saw things as they were, and it would require an additional casting of it, with him OUTSIDE the area of effect, to undo that.

Without this kind of exemption, tho, there would be additional issues:

An old example.. There are two primary images.. Once you see them both, it requires a conscious act to switch to seeing the other again, and you still tend to see aspects of the other image -- To me, being at the heart of these spells works the same way -- even if you see the illusion, you still see thru it. 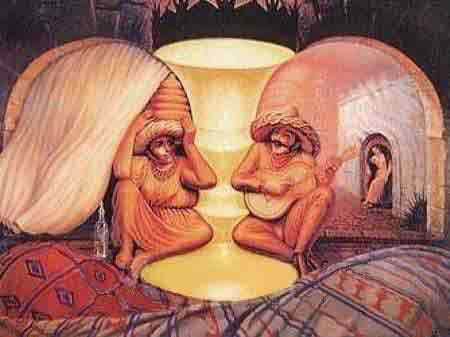 I'm pretty sure that Ron tried to come back the day after, but they were already gone. I do remember there being some heaviness when they had to leave the campsite after Ron left, because he wouldn't be able to find them again after they had left.

This bothered me quite a bit until I thought about the wands. I now assume it's because the protective enchantments were all performed using Hermione's wand. And since Harry was holding her wand at the time, he could break through the enchantments. Kind of like he was holding the key to the lock.

21
How did Snape find Harry and Hermione in the Forest of Dean?

10
How did the Deluminator help Ron find his way back?
6
What are the rules governing how a Patronus can interact with the physical world?
21
How did Snape find Harry and Hermione in the Forest of Dean?
14
In which situations does a wizard's patronus change due to love?
30
Why did Harry let Ron destroy the locket horcrux?
15
Why didn't Sirius, and Ron, Harry, Hermione just conjure animals to use as food while they were on the run?
12
How did Harry and his friends know so many places to disapparate to?
22
Why were there no protective enchantments around the tent, when the trio was caught by Snatchers?