How did Princess Leia survive this?

In the Last Jedi movie, there is a scene where

her spaceship is taken down, Princess Leia is thrown into outer space, and seen floating there, frozen.

However, she manages to survive this, while any ordinary human being couldn't.

How did she manage this? Is this done by using the Force?

Leia used the force, brought out by her survival instinct.

Survival in space is something that seems within the grasp of Jedi to do, as is evidenced by Plo Koon in The Clone Wars

I can withstand the pressure for some time

While it's unclear whether or not this is a skill specific to the Jedi, it seems to be with their grasp. Although Leia is not a Jedi, she is evidently force-capable and may have been able to use the force to keep herself alive.

Rian Johnson confirms that this is something to do with the force, related to a survival instinct, like Luke in ESB

I liked the idea that it’s not Luke concentrating, reaching for the lightsaber; it’s an instinctual survival thing, like when you hear stories of a parent whose toddler is caught under a car and they get superhuman strength, or a drowning person clawing their way to the surface. It’s basically just her not being done with the fight yet.

I wanted it to happen [for Carrie] and I knew it was going to be a stretch. It’s a big moment, and I’m sure it will land different ways for different people, but for me it felt like a really emotionally satisfying thing to see. Inverse - ‘Last Jedi’ Director Explains All the New Force Powers (and the Leia Scene)

This is re-confirmed in an interview with IGN:

“This is a reflex action on her part,” Last Jedi writer-director Rian Johnson explained. “It’s the equivalent in my head of when you hear about parents, toddlers are caught under cars, and they suddenly get Hulk strength and can lift it up. Or a drowning person climbing their way to the surface." ...

“It’s instinctual, her use of it. It’s the opposite of when Luke Force-pulls the saber in Hoth. It isn’t like, ‘I’m going to try and do this.’ For her it’s just an instinctual thing of, ‘I’m not done yet. I’m not giving up. I’m pulling myself back in.’”
Star Wars: The Last Jedi Director explains Leia's relationship to the Force.

Creatures such as the Purrgil were able to survive the vacuum of space even though they weren't Force-Sensitive, how they could isn't clear, but they were also able to jump into hyperspace.

After Carrie Fisher's untimely death, Kathleen Kennedy and Rian Johnson had discussed changing the scene to make it so that Leia died "drowned in moonlight" as she had so famously wished for, however they had decided not to change the scenes and to leave the survival intact.

“We were a little ways into postproduction when she passed away, and so we had it mostly put together,” Johnson said. “We didn’t really end up changing it. And that includes adding lines back in that we had cut out or anything like that.”
Vanity Fair - Star Wars: The Last Jedi—What Happened to Leia?

The decision to not make the death so in-line with Fisher's iconic quote may have changed the beauty of the scene out-of-universe, but Fisher still had a role to play In-Universe. It also makes it clear that as beautiful as the parallel is, it’s not certain that this was the intention of the scene, as it had been filmed before her death.

It is possible for humans to survive exposure to the void of space, for a duration on the order of minutes. However, you would be unconscious pretty quickly and in need of rescue.

(Warning: This answer references real-world animal experimentation and death, and contains spoilers for the last issue of the 2015-2016 run of the Darth Vader comic.)

Leia most likely used the Force. And she was not the first one to pull such a stunt. In the fifth issue of the Star Wars: Kanan – The Last Padawan comic book series, Kanan Jarrus, a Jedi Padawan Caleb Dume at the time, and an Order 66 survivor, was caught by a group of stormtroopers. As they were about to execute him, Jarrus called for the Force and opened the airlock door of the Imperial Gozanti-class cruiser, resulting himself to be ejected into space. 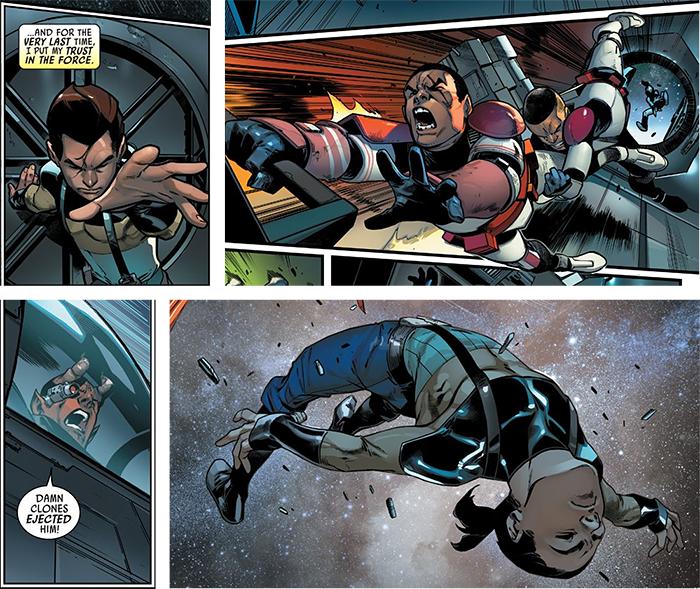 Jarrus floated in vacuum for a period of time, and even the stormtroopers assumed he was dead. He was revived, however, in the hands of his friend, Janus Kasmir, soon after being brought onboard his ship. 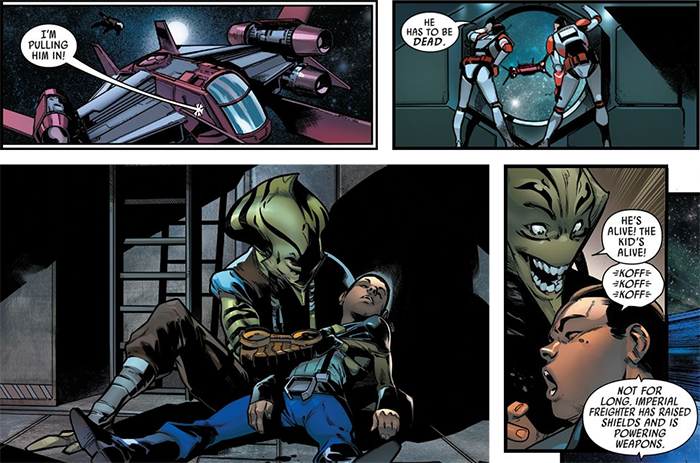 The event took place shortly after Order 66 was issued, which would make it around 19 BBY, and about 53 years before Leia was blown out into space from the Raddus in The Last Jedi. It proves a human with the apprentice-level training in the Force can survive in vacuum, in some circumstances.

This is explained more now post Rise of Skywalker

Luke Skywalker Leia underwent full Jedi training soon after the events of Return of the Jedi. She stopped the training just before her final test but over the years we can believe that she continued honing her skills in the force. She also led Rey’s training so she is experienced enough to teach about the force.

This explains how she was able to manipulate the force in order to survive.

The universal Force decided to reanimate her and keep her alive so that she could lead the rebels away thus keeping the Balance in the Force. Don't forget, the Midi-Chlorians are super strong within her life-force giving her superhuman powers when they see fit!

0
What exactly did Leia do?
52
Did Princess Leia ever use The Force?
2
Why couldn't Palpatine force fly in Return of the Jedi?

88
Why specifically was Obi-Wan Kenobi the "only hope" of Princess Leia?
19
Are there any new Disney-era examples of Leia actively using the force? (Not passively sensing things)
37
Why was the First Order so fixated on finding Luke? What about Leia?
3
Does Leia understand the Binary Language of droids?
21
Which predictions of The Last Jedi: Darths & Droids Bingo were correct?