Why is Daenerys Targaryen called the "Mother of Dragons"?

This is the Mother of Dragons hat from the 2017 Winter Bash. 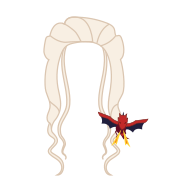 I understand that the hat is a reference to the Game of Thrones character Daenerys Targaryen, but I don't know more than that.
Why is she called the "Mother of Dragons"?

In full disclosure I have not read the books, nor seen the show.

She stepped into the flames with her dragon eggs and came out unhurt with three baby dragons; they are her children.

And there came a second crack, loud and sharp as thunder, and the smoke stirred and whirled around her and the pyre shifted, the logs exploding as the fire touched their secret hearts. She heard the screams of frightened horses, and the voices of the Dothraki raised in shouts of fear and terror, and Ser Jorah calling her name and cursing. No, she wanted to shout to him, no, my good knight, do not fear for me. The fire is mine. I am Daenerys Stormborn, daughter of dragons, bride of dragons, mother of dragons, don't you see? Don't you SEE? With a belch of flame and smoke that reached thirty feet into the sky, the pyre collapsed and came down around her. Unafraid, Dany stepped forward into the firestorm, calling to her children.

The third crack was as loud and sharp as the breaking of the world.

When the fire died at last and the ground became cool enough to walk upon, Ser Jorah Mormont found her amidst the ashes, surrounded by blackened logs and bits of glowing ember and the burnt bones of man and woman and stallion. She was naked, covered with soot, her clothes turned to ash, her beautiful hair all crisped away … yet she was unhurt.

The cream-and-gold dragon was suckling at her left breast, the green-and-bronze at the right. Her arms cradled them close. The black-and-scarlet beast was draped across her shoulders, its long sinuous neck coiled under her chin. When it saw Jorah, it raised its head and looked at him with eyes as red as coals.

A Game of Thrones - Daenerys X

At this point in history all of the known dragons had died out and all that was left in the world was some dragon eggs and stories. The event is all the more amazing because of this but also because she stepped into a fire and stayed until everything else was burnt away but her and her dragons, because of this she is also called The Unburnt.

You can watch the scene from the show here (NSFW - contains nudity).

Not the answer you're looking for? Browse other questions tagged game-of-thrones a-song-of-ice-and-fire reference or ask your own question.