In Wolverine: Weapon X, Wolverine encounters a set of humans "improved" by nanites that given them a lot of the powers that Wolverine himself has, including improved healing and claws. I ended up with two questions about their powers:

Their laser claws are mentioned and green eyes shown in the below panels (apologies for the low resolution): 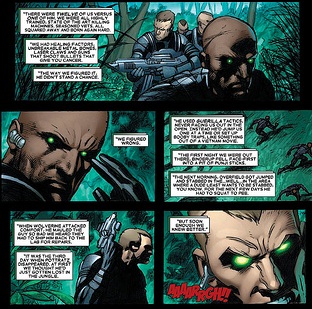 Their claws are shown on this cover: 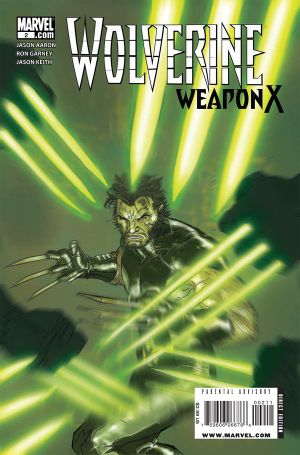 The Blackguard or Strikeforce X are an attempt to create human soldiers with the physical capabilities of Wolverine, using technology to replicate to varying degrees Wolverine's physical capabilities. They have adamantium-laced skeletons from the Weapon X project and they appear to have substituted enhanced sight instead of olifactory senses. They also appear to have skimped on the adamantium-claw upgrade, substituting a metallic/laser-enhanced hybrid. (As you suggested, lasers don't terminate.)

The Blackguard are non-mutant humans who have been technologically enhanced using drugs, techno-organic nanites (for an enhanced healing factor to counter the adamantium-process used to give them damage-resistance) and other bionic implants (energy claws and possibly eyes).

Likely it was easier to give them enhanced visual capacity than olifactory senses. So I suspect they have the same capacity as cats for absorbing and capturing more light from their surroundings. These would be the equivalent of starlight lenses, something these soldiers would be familiar with, requiring less training.

As far as their claws, they are not lasers but a high grade metal enhanced with some sort of laser system to improve their cutting and damage dealing capacity. The glowing eyes and claws are also likely invoking the TVtropes concept The Rule of Cool. Fans were quite taken with the glowing claws. Though I question why they didn't just get the full adamantium upgrade? Cost limitation? Unavailability of secondary adamantium?

They are also highly skilled with various firearms and often use specialized ammunition.

13
Is Dog related to Wolverine?
14
Is Wolverine an alcoholic?
20
Are there X-Men with mundane powers?
4
Which Nightcrawler rescued Wolverine?
11
How did Punisher kill Wolverine?
9
Can Wolverine survive blood-borne diseases?
9
In Wolverine Origins, couldn't wolverine just cut away the flesh surrounding the cut made by the Muramasa and regenerate?
7
How vulnerable is Wolverine to electricity?
3
When did Weapon X give Wolverine his adamantium?
5
Can Wolverine be decapitated by an Adamantium based weapon?