Was Space Gary cut from the final movie?

In a related question of mine I asked who Space Gary was and he turned out to be Carrie Fishers dog dressed up as some alien species in the Canto Bight casino. I have since re-watched the film and was looking closely to see if I could spot Gary. It got to the point where Finn and Rose were at the bar and before we get a look down it BB-8 comes rolling in.

Was Space Gary cut from the final film? Was he just dressed up as a tribute/favour for Carrie Fisher and never meant to be in the film?

Space Gary is still in the film, but he is difficult to see.

Space Gary — who resembles a small, dark dog with upright ears — appears in the film's final cut, in a dimly-lit part of the background, just before the scene where a gambler mistakes BB-8 for a slot machine: 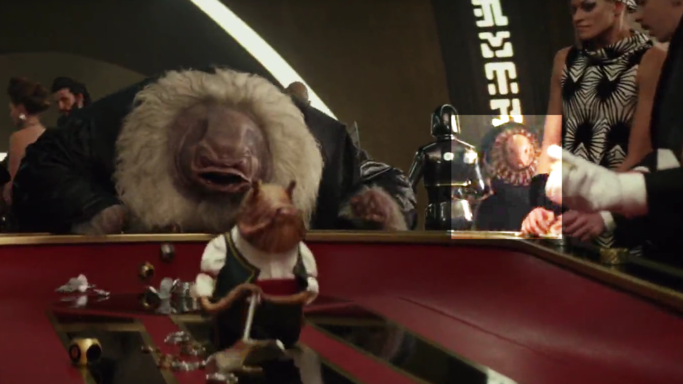 This image has been cropped from the Blu-ray version, 55 minutes 15 seconds into the film, and the area of interest on the right side has been lightened. Space Gary's handler/owner/servant, a stocky being standing between the wall and the serving droid, is facing the camera and holding Space Gary in his right hand. Space Gary is facing to the right.

In the original frame, this section is so dimly lit that one must look for Space Gary's owner, using as reference a scene not included in the final film: 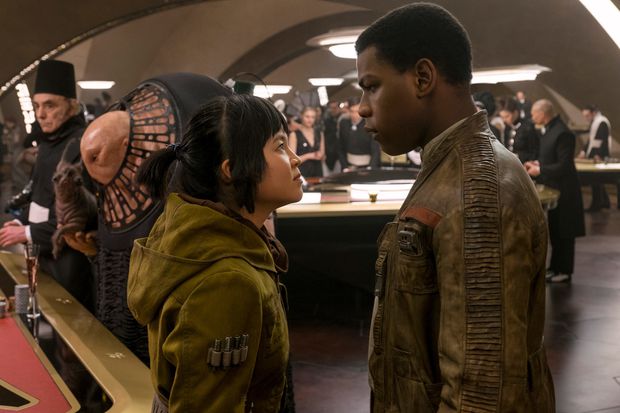 Originally, the film spent some more time clarifying the dynamic between Rey and Finn, and further setting up Rose’s crush on the Resistance “hero.” Rose chastises Finn for “pining for Rey,” which Finn quickly denies, claiming that he was “raised to fight” and that he finally found something to fight for in his friend, Rey. “Whatever,” responds Rose with a hint of jealousy.

They also had this note

There were a lot of creature extras that didn’t make the film, but don’t worry – they may have been reused for Solo: A Star Wars Story.

Not the answer you're looking for? Browse other questions tagged star-wars behind-the-scenes the-last-jedi or ask your own question.

40
Is there really "No Underwear In Space?"
34
Does this cut material from Rogue One still appear in the novelisation?
38
Who was the real "Master Code Breaker"?
48
Who is Space Gary?
48
Did the stable boy use the Force?
1
How are fathiers raced?
11
What are the implications of being "cut off from the Force"?
3
Who runs the casinos of Canto Bight?
26
Was Wil Wheaton's part cut from the movie, "The Last Starfighter" (1984)