I'm trying to remember the title of a relatively low budget horror-comedy that I watched somewhere in the last decade. I'm not sure how much of the comedy was intentional, but I recall finding some aspects funny.

A man and his wife/fiance go to a secluded house in the woods. She is having mental health issues and ostensibly it is to help her recover. (In the attic?) She finds a (blue?) demon mask. I think it was a Japanese style demon, i.e. oni.

She may or may not have some visions when she finds the mask. Soon after, a figure wearing the mask shows up trying to kill her.

We find out the masked figure is someone paid by the husband to kill her because divorce is too hard or something. All the visions are in her mind.... or so we think.

The next twist is that the demon is actually real. It possesses her and kills the husband after luring him to bed.

Most of my Google searching has revolved around "blue demon" but it has been unsuccessful.

In response to the given answer, I'm fairly certain that the two main characters were white. I would be surprised if it was based off any Asian booksl or game.

I had some suspicion that the film was an After Dark horror film. I ended up just looking through all of them and found Nightmare Man which is the movie I was looking for. As expected, I remembered some of the details wrong, including that the mask was an 'African fertility mask', not that of an Oni.

It is possible you're looking for one of the film adaptations of Ao Oni?

The movie begins with Anna running around the house avoiding something. She then reaches a room and closes the door as the voice of the brother calling her. The door opens with the figure of her brother by the gap. The scene then changes back to the time the same boy listening to someone singing on the street. The boy then runs into the road and gets killed in the traffic accident. Anna is then seen placing flower by the place of accident and encounters Shun being bullied by Takuro and his friends.

As the scene goes back to the terrified Anna in the room, it suddenly switches to the time where Anna spends her time with Shun playing the escape game Shun made by the riverbank. Anna notices the scar in Shun's hand and asks about it, which Shun avoids to answer. Anna then heads home as Shun stays a little longer to finish checking his game. Takuro then appears and bullies Shun. Anna is seen looking back as she walks home.

Takuro plans on killing Anna since she knows too much, but suddenly gets caught by the Blue Demon and eaten offscreen. Anna wakes Hiroshi up and the two flee. The Blue Demon notices them and chases after them. Hiroshi, knowing that he can't move so easily and slows Anna down, insists on staying to buy Anna some time to escape. The Blue Demon stomps on him as it chases Anna. Anna finally reaches the same room she was in as in the beginning of the movie, but instead of his brother, Shun is calling her from the door. Anna, confused about what to do next, opens the door into the shining light, where she is greeted by Shun.

The scene goes back to the river, as Shun asks Anna whether she is okay. Shun then explains about the dynamics of the game as Anna notices his scar and holds his hand, telling him to speak whatever troubles him to her, as she can't help her brother and hopes that the same thing will not happen to Shun. Shun replies by holding Anna's hand back, with the screen on the laptop says that they've cleared the game.

Liam added the answer to their question, something I only just now noticed, Nightmare Man (2006).

Ellen believes there is a supernatural creature trying to kill her named the "Nightmare Man". However, her husband and doctors believe she is a paranoid schizophrenic.

On the way to a psychiatric ward, the Morris' car breaks down. When her husband goes to get gas, Ellen stays behind and is attacked by the mysterious, horrifying enemy, the Nightmare Man. Escaping into the nearby woods, Ellen stumbles upon a country house where two young couples are spending the weekend. They do not know if the killer is real or just a figment of Ellen's tortured mind nor if the killer is outside or already inside the house.

As people start dying, nobody knows whom they can trust. Near the end of the film, the killer is revealed to be a hitman hired by Ellen's husband to kill Ellen before she discovers his affairs. Ellen reveals she is possessed by the real Nightmare Man, a demon who enters a female body first by getting them to wear his mask, then he rapes them. As the Nightmare Man, she kills the hitman and her husband. She sets her sights on Mia, the survivor, who kills Ellen, but is stripped and raped by the Nightmare Man's spirit. She is left in an institution, where the doctor decides to take her off her medication, which are the only things that keep the demon asleep.

What may have been confounding efforts to find this is that it's an African fertility mask, not a "blue oni" mask. 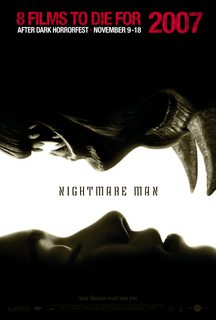 9
Short book involving a car crash and artificial humans
4
A horror movie similar to poltergeist and the conjuring
3
90s Teen horror - boyfriend deal with demon
10
Old cartoon show about short horror stories
15
Christmas short horror story about a woman who becomes trapped in another body?
4
I'm looking for a short story/novella about a plague through genetics that infects the world
10
Novel about a red killer and a woman whose drawings come to life
16
Sci-fi book about a professor who uses a simulated reality machine she invented to relive past experiences with her late husband