What does the code breaker's hat say?

In The Last Jedi, I noticed that the code breaker who

helped Finn and Rose before later betraying them

wears a hat with alien lettering. I assume this is his hat and not something he just found on the ship he stole, but then again he is a thief and quite unpredictable in his behaviour.

Does the writing on the hat have any meaning or significance?

DJ, as the thief / code breaker is known, sports a hat that says "DON'T JOIN", according to his entry in the official Star Wars Databank:

A gifted slicer, the man known only as DJ used his skills to steal from wealthy gamblers passing through Canto Bight. Profoundly cynical, he saw the First Order and the Resistance as halves of the same corrupt money machine. He wore his simple philosophy on a plate adorning his hat: DON’T JOIN.

This is consistent with his statements to Finn and Rose in the film, including his revelation that the First Order and the Resistance buy weapons from the same dealers.

Here is the writing in question (written in Galactic Basic) on a licensed toy of DJ: 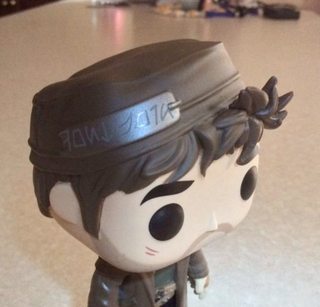 23
What does Vader's HUD say in Revenge of the Sith?
5
What material is Embo's hat made out of?
4
What does the text in the Ghost's schematics say?
37
What does the writing on Poe Dameron's flight vest say?
13
Is there a logo for the Grey Jedi code in the Episode 8 trailer?
38
Who was the real "Master Code Breaker"?
29
Why did Luke say "It didn't scare me enough then, it does now"?
5
What type of reactor does The Raddus in SW:TLJ use for propulsion?
24
What did Kylo Ren say about the Supreme Leader?
12
What does the writing on Poe's helmet say?