Which SF anthology about dinosaurs is this?

It started with a one-page poem about a knight who wishes to fight a dragon and ends up in the Mesozoic only to be eaten by a dinosaur... I think this was by L. Sprague de Camp. (It's also not "Rivers of Time" which starts with a different poem by de Camp -- this was a multi-author anthology.)

I read this book around 2010 in the A&M university library, but it was old at the time -- I think older than the dinosaur fiction boom after the movie of Jurassic Park.

The one-page poem is "Reward of Virtue" by L. Sprague de Camp. It was published in The Magazine of Fantasy and Science Fiction, September 1970, available at the Internet Archive.

As far as the ISFDB knows, this poem has not appeared in any multi-author anthologies, although it is in several de Camp collections. Some of these are just collections of poems, so they are probably not what you're looking for. The most likely candidate I can find is The Best of L. Sprague de Camp. However, that is not an all-dinosaur collection, although it includes several dinosaur stories; and the poem is not at the beginning of the book, it's on p. 112 of my copy. To help you decide if this is the book you're looking for, you can read reviews by Algis Budrys and Robert Coulson. 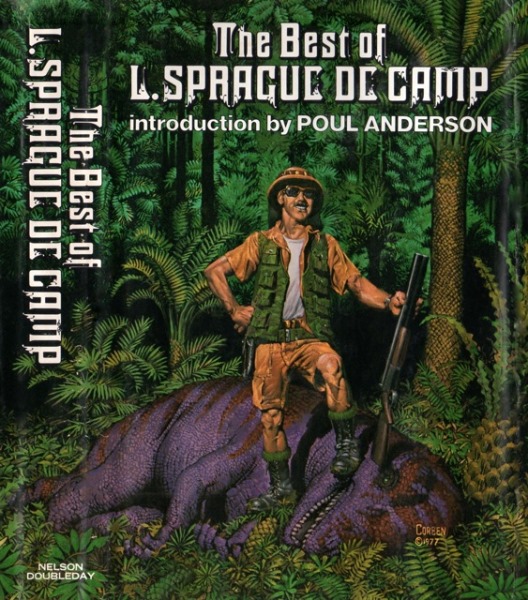 You added in a comment that you think the story "Hermes to the Ages" by Frederick D. Gottfried was in the anthology you're looking for. As far as the ISFDB knows, that story has appeared in only one anthology of dinosaur stories: The Science Fictional Dinosaur, edited by Robert Silverberg, Charles G. Waugh, and Martin H. Greenberg: 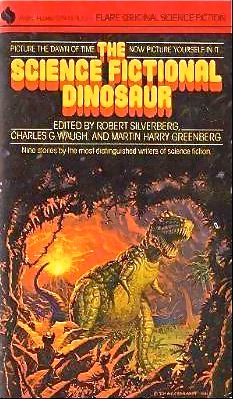 The poem you described was identified in my previous answer as "Reward of Virtue" by L. Sprague de Camp, published in The Magazine of Fantasy and Science Fiction, September 1970, available at the Internet Archive. Unfortunately, The Science Fictional Dinosaur does not contain that poem or any other. (So says the ISFDB, and I checked my own copy.) Here is a possible explanation: You said you read the book in a college library. Librarians are notorious for pasting things in books. Maybe a rogue librarian pasted a copy of de Camp's poem "Reward of Virtue" onto a blank page in the front of a copy of The Science Fictional Dinosaur?

You can check the contents of The Science Fictional Dinosaur at the ISFDB and see if the titles look familiar. Some of the stories are available online:

"Poor Little Warrior!", a short story by Brian Aldiss, from The Magazine of Fantasy and Science Fiction, April 1958.

"Day of the Hunters", a short story by Isaac Asimov, from Future, November 1950; plot summary at Wikipedia.

"A Statue for Father", a short story by Isaac Asimov, from Satellite Science Fiction, February 1959; plot summary at Wikipedia.

"Wildcat", a novelette by Poul Anderson, from The Magazine of Fantasy and Science Fiction, November 1958.

"Our Lady of the Sauropods", a short story by Robert Silverberg, from Omni, September 1980; plot summary at majipoor.com.

8
Short story about meeting different intelligent species that have all evolved on Earth
18
Who wrote the first SF story in which a time-traveler went back to the days of the dinosaurs?
12
YA sci-fi/fantasy story collection (most notable story being about a dinosaur-possessed crane)
12
90s Novel Capitalizing On Jurassic Park
7
Fiction novel or movie about sentient dinosaurs
5
Which SFF work was first to use dinosaurs?
4
Short story about aliens, in contact with a middle schooler who feels doom approaching. At the end the aliens "wind down" Earth
11
Short story about sculptor who falls in love with a personal assistant AI her husband creates