I watched a few episodes while at the gym and it was on MTV I am pretty sure.

I never found out what show it was since it was a gym TV that hung from a wall.

Please let me know your thoughts. It almost reminds me of Cowboy Beebop animation style but not as fluid.

I found it.
Heat Guy J

Heat Guy J chronicles the adventures of a young Special Services officer named Daisuke Aurora and his android partner known simply as "J". The pair live and work in the fictional, futuristic Metropolis of "Judoh" (Jewde), where the understaffed and underfunded Special Services Division of the Bureau of Urban Safety has its headquarters.

Daisuke Aurora (ダイスケ・アウローラ Daisuke Aurōra, romanized as "Aurola" on his ID card seen in episode 10) - Department of Security, Central Headquarters Special Services Employee, age 21
Voiced by: Masaya Matsukaze (Japanese); Steve Cannon (English)
Nicknamed "Dais" (or "Dice"). Cool and laid back, Daisuke is one half of the Special Services Bureau's investigative team. He prefers action to paperwork, but when he's not out on the street fighting crime, he's often seen in various states of in-action.

Although he never really shows it, Daisuke is quite compassionate and has a strong sense of justice. However, he has deep and painful memories of the vanishing of his mother and his father (a politician) being murdered by an android. The only memento of his father is a bullet pendant he wears around his neck.

Heat Guy J was licensed and distributed in the U.S. in 2003 by Pioneer (which subsequently became Geneon Entertainment). It was re-released by Funimation Entertainment in the fall of 2009. The first 13 episodes of the show also was broadcast on the cable channel MTV2.

This might be Blassreiter. It's mechanical demons, not robots, though. 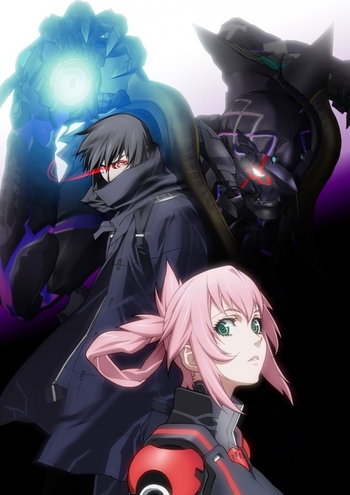 The story is set in a fictional Germany and centers on the outbreak of biomechanical creatures called "Demoniacs", who rise from corpses and attack people savagely. The Demoniacs have the ability to merge with most technology including cars and motorcycles, not only gaining control of them but also enhancing their performance greatly. Against them is a group of people known as XAT, Xenogenesis Assault Team, who police these Demoniacs in an attempt to keep the peace and discover the reasons for the "Demoniac" change. All the while, a number of human-turned-Demoniacs appear. Some use their powers for good, others for evil. One will rise above all other Demoniacs to become known as the "Blassreiter".

Malek, who has been ridiculed and attacked by his school's seniors since he was adopted by Amanda, is distraught by the death of Gerd. He believed that Gerd would punish his attackers, but Gerd ended up being a "coward" by letting himself be killed. When Malek's friend Johann commits suicide after realizing his mistakes in ridiculing, he wonders why no one will stand up for justice. After being offered a pill by Beatrice, Malek transforms into an Amalgam. Malek kills the delinquents and is hunted down by XAT. Joseph, who had met Malek before, attempts to stop Malek from losing control and intervenes, while Brad is shooting thermal shots on the roof top a couple buildings away. Before Brad is about to shoot to start shooting, Joseph jumps in front of Malek to take the shot for him, causing Joseph to be severely injured. Amanda and Al start firing at the wounded Joseph, but Malek shouts and Amanda starts to recognize his voice. Brad shoots at Malek's shield and destroys it, and aims for another shot to Malek's head. Amanda realizes that the Amalgam is actually Malek, and before Brad shoots, Amanda jumps in front of Malek to block it, barely missing her and Malek, who flees, carrying the body of the wounded Joseph. The two escape together while Joseph is unconscious. They go to an abandoned church, where Malek attempts to try and heal Joseph. They are then found by Xargin, who Malek sees as an enemy, and attacks him. Joseph tries to warn Malek not to, but Malek still does, but he gets beaten by Xargin easily, and gets knocked unconscious. Eventually, they are found by Amanda and Hermann. Malek falls into a coma and both are captured by XAT. At the same time, XAT is facing a critical crisis. Their commander, Wolf, has slowly begun to degenerate into a Demoniac. He turns on XAT by infecting everyone, except for Hermann and Amanda. Their comrades die to protect the two from becoming a Demoniac. The two escape via helicopter, but Hermann is forced to crash the helicopter. Using a XAT Paladin, Amanda flees and decides to pursue Joseph.

The bullet that Brad carries around his neck is later used to Mercy Kill his old partner, Lena.

However, I have found no evidence that it showed on MTV.

Take a look to outlaw star, it does features a caster gun that has a bullet for a specific thing.

The robot its and android called Melfina, it was showed on cartoon network around 2001-2002

10
Old cartoon / anime about a spaceship that transforms in to a robot
9
Old 90s TV show - Guy fights aliens in a suit
8
Anime movie: kid is so good at VR game that government tries to recruit him
8
Looking for a show about a ninja who kills entire village, then cleans the blood off his hands by slicing water
6
A 90s anime/cartoons/ with a main character who has a red mecha suit with a weapon like a spear!
3
Looking for a cartoon from 2002 to somewhere around 2013 about a ship powered by crystals
5
Anime TV show with Elvis/Fonzie-like protagonist
7
Anime about a girl with marks around her neck
6
Old cartoon with a red? robot in a desert and a girl