Is Snoke a part of Operation: Cinder?

Apart from the new expanded universe canon in Star Wars, followers of additional tie-in content are learning new things about the final days of Darth Sidious/Emperor Palpatine, including that he was looking for a "super weapon" (Aftermath Trilogy), interested in "the unknown regions of space" (Thrawn Novel) and that he left contingency plan, Operation: Cinder (Star Wars: Battlefront II, Shatered Empire), for the Empire to DIE without him, but also so it could begin again! 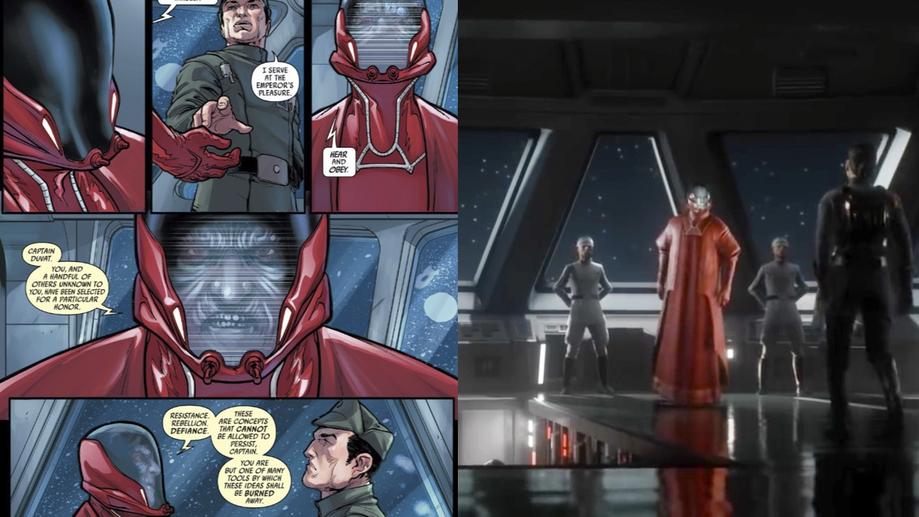 Operation: Cinder first appeared in the second issue of the Marvel comic book series Star Wars: Shattered Empire, written by Greg Rucka.1 The second issue, released on October 7, 2015,[13] depicted the beginnings of the attack on Naboo,1 while the third issue, released on October 14, 2015,[14] showed its resolution. Operation: Cinder is further depicted in the story campaign mode of Star Wars Battlefront II, where the Imperial utopia of Vardos is targeted and the battle of Naboo is resolved. The events of the 2017 novel Aftermath: Empire's End, written by Chuck Wendig, revealed that Operation: Cinder was part of a greater Contingency devised by Emperor Palpatine to destroy the Empire and its adversaries so that it could begin again.[8]

From other more recant tie-in material we also learn a little more about how Snoke becomes the [Supreme] leader of The First Order.

Eventually, Snoke witnessed the rise and eventual fall of the Galactic Empire.1 What was left of the Galactic Empire fled to the Unknown Regions and took the shape of what eventually became the First Order. Although most of the Imperial officers would have likely perished while crossing this uncharted realm, the ancient hyperspace trails blazed by Snoke's retinue helped them to stay there and organize themselves. http://starwars.wikia.com/wiki/Snoke

So my question is, Is 'Supreme Leader' Snoke an INTENTIONAL PART of Darth Sidious' Plan?

The Chiss from the Unknown Regions

Sidious' interest in the Unknown Regions continued. This came to a head when the crew of the Venator-class Star Destroyer Strikefast, under the command of Captain Voss Parck, encountered the Chiss known as Thrawn in Wild Space. Many years earlier, Anakin Skywalker told Palpatine of this alien and how they worked together. This alien claimed to have a great deal of knowledge on the Unknown Regions. Thrawn was then brought before Sidious on Coruscant in order to be questioned. Thrawn told the Emperor of threats lurking within the Unknown Regions and how they might one day find the Empire and offered his military skills. Sidious then deduced that Thrawn's intentions were to help protect his people from these threats. Thrawn assured the Emperor that his allegiance would be to the Empire. **Thrawn then revealed that he had known Anakin Skywalker during the Clone Wars, thus proving who he was to the Emperor.**Many years into the Empire's reign...http://starwars.wikia.com/wiki/Darth_Sidious

As secondary questions: Does he relate to a super weapon Sidious was looking for and/or Thrawn? Is this all interconnected? Whom is leading whom? I know there may not be enough information to determine ANY of these things, at this time, but just in case there is something I missed.

The release of The Rise of Skywalker answers the question on the relationship between Palpatine and Snoke.

Has been alive all this time, planning both the First Order and its successor, the Final Order.

created Snoke in a laboratory on Exegol using some combination of cloning technology and Dark Side sorcery.

So, it seems that

Snoke was part of Palpatine's plan all along. While one can argue whether he truly participated in Operation: Cinder per se or only a successive operation, it is clear that Palpatine arranged for Snoke to arrive when he did to assist and take the reigns of the First Order. That is, Snoke was part of Palpatine's plan for restoring his own power. Snoke was not some wandering Dark Side adept who stumbled upon Imperial remnants and decided to become their savior, as many have previously proposed.

It is known that Snoke did play a part in the evacuation of certain Imperial forces into the Unknown region of the galaxy. However, there are no canon sources that mention Snoke being involved in Operation: Cinder, which was ordered by dead Palpatine.

Because Force Awakens happens 30 years after Return of the Jedi, and because it was only made to make sure the empire didn't outlive Palpatine, we can assume Snoke had no part in it.

Also since we don't know for certain who Snoke is, we can't assume he was involved the Empire at all (especially since he didn't say any of that, 'finish what the Empire started' crap, and we probably would have at least noticed him if he was part of the Empire in the original trilogy).

118
Do the Imperials know they are evil?
24
How did Grand Moff Tarkin Feel About Darth Sidious?
8
Why were the Unknown Regions left uncharted?
18
Did any planet, system, or regional governor think the Empire was good for them?
26
Did Darth Sidious ever intend for Darth Vader to kill him and take his place?
6
Do the Knights of Zakuul fall to the the Dark Side?
6
Was Darth Maul part of the Separatist movement?
5
Why did Sidious never seek to turn Rey toward the dark side of the Force?