It was technically a nonfiction book hardbound about space travel, but the author suggested a lot of imaginative little science fiction stories.

I read it during the 1960s so it was at least that old, and in English - if translated I never noticed any such statement.

One section depicted a voyage to the moon that discovers the far side has air. Earthlings walk in a lunar forest and fall into a pit trap and the moon people come to get them.

There were some line drawings as illustrations, including one of the pit trap in the moon forest. Another drawing titled "Escape from Earth" showed a spherical rocket ship blasting off.

I remember a table at the back listing the nine planets (so it should have been written after 1930) and the astronomical symbol of each, along with little drawings of weird alien beings for each planet.

And I think there was another table with information about the planets and some moons. I remember it listed the diameter of Triton, moon of Neptune, as 5,000 miles! I suppose there could have been a scientific basis for that, if an astronomer used the brightness of Triton and its assumed low albedo to calculate its size.

I hope I have given enough info about that quaint space travel book for it to be identified. 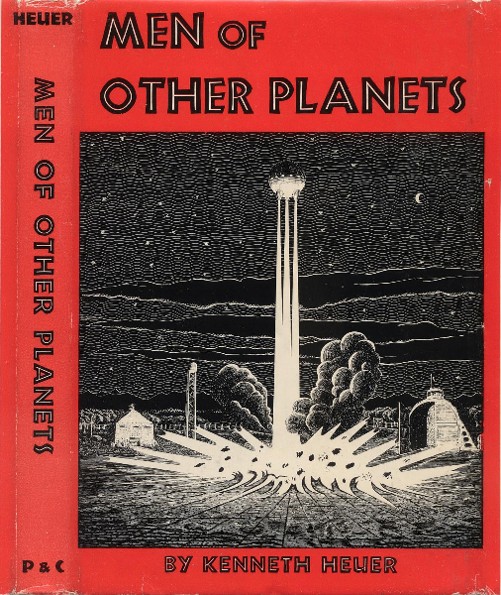 Men of Other Planets by Kenneth Heuer, published in 1951.

From a review by P. Schuyler Miller in Astounding Science Fiction, December 1951 (available at the Internet Archive):

This handsome little book by a lecturer at the Hayden Planetarium in New York, well illustrated with block prints by R. T. Crane and numerous charts of the solar system and its planets, should have had a much handsomer text.

The author forestalls criticism by admitting his indebtedness to the French writer of the last century, Camille Flammarion — indeed, in places the style of the book reads like pure Flammarion, and the concepts of the intelligent "men" who, it is suggested, may inhabit the various planets are in the Victorian-romantic tradition — e.g. the "thinking and talking trees" of Venus. On the credit side, the author describes many or most of the latest findings as to the physical conditions on each planet, and has added a table which describes the telescopic and naked-eye appearance of each to a terrene observer.

One section depicted a voyage to the moon that discovers the far side has air. Earthlings walk in a lunar forest and fall into a pit trap and the moon people come to get them.

Before returning home, however, we may make a daring expedition across the other side of the moon; with the shuttle of the imagination, we can weave a picture of what might be found. We wander around into the back side of the moon, leaving behind us the face—with which we are so familiar—that is turned always toward the earth. We wander on and on, and the scenery grows less and less familiar, and our progress becomes slower and slower; momentarily there is the expectation of something new and unforeseen; no one knows what lies ahead of us. All at once, a great forest—black and mystical—appears, where the trees grow close and the stems are interlocked. We are the first ever to gaze upon this silent forest. We step into it, and there is no light there, as the branches are knotted tightly overhead. Yet outside the forest the land is flooded with the glare of an intense sunlight. We grope with our hands, but each branch breaks as we touch it, and the forest floor is covered with ashes. Our feet sink at every step, a fine cloud of cinders springing up into our faces. Then to the right among the trees we see the inhabitants of the forest working. They appear to be digging holes, evidently planting a garden. But they set nothing in the holes; and having covered them with sticks and ashes, they go a little distance off and hide behind the bushes, watching; and we notice that as each walks he puts his foot down carefully, constantly on the alert as to where he treads. We should like to go and work with these men; and not looking where we step, we sink suddenly into one of the holes. And eyes gleam from behind the bushes, and we hear the men laugh in the dark.

There were some line drawings as illustrations, including one of the pit trap in the moon forest. Another drawing titled "Escape from Earth" showed a spherical rocket ship blasting off.

"Escape from the Earth", the full-page drawing on p. 11 (reproduced on the dust jacket), shows a spherical rocket taking off; "The other side of the moon" on p. 55 shows a pit trap in a forest.

I remember a table at the back listing the nine planets (so it should have been written after 1930) and the astronomical symbol of each, along with little drawings of weird alien beings for each planet.

Just so; nine planets and the Sun, Moon, Comets, and Asteroids.

And I think there was another table with information about the planets and some moons. I remember it listed the diameter of Triton, moon of Neptune, as 5,000 miles!

No great difference can be noticed between day and night on Neptune, the outermost giant planet. The sun is reduced 900 times in surface and in intensity, although it shines with a light of more than 40,000,000 stars of the first magnitude. The planet has two satellites, or moons, one of which, in importance, is a real world itself—as it has an estimated diameter of 5,800 miles. Ganymede and Callisto, satellites of Jupiter, have diameters of 3,270 miles and 3,140 miles respectively, and Titan, a satellite of Saturn, has a diameter of 3,550 miles.

On p. 156 there is a table which the likes of which I haven't seen anywhere else. The first of three columns lists 20 worlds of the solar system: the nine planets, the four main asteroids, and seven moons. The second column gives the surface area of each world in square miles, and the third column gives the population:

In compiling the third column, the population of the different globes was estimated at eleven inhabitants to a square mile, which is the average density of population for the whole earth, both land and water surface. The superficial area of our planet was used inasmuch as other worlds must have their uninhabitable regions too. And the present population of the earth was taken as a standard; this is the best guess we can make in light of the present state of scientific knowledge.

Not the answer you're looking for? Browse other questions tagged story-identification space-exploration or ask your own question.