How did Jaqen H'ghar get caught? 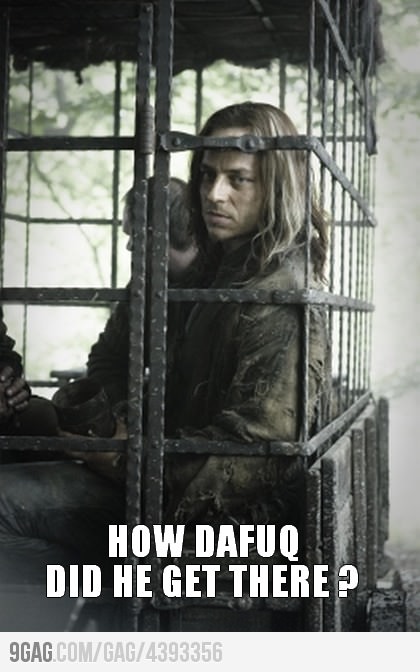 Did Jaqen H'ghar end up in that cage because he knew that he would meet and "recruit" Arya, or was it some strange coincidence? Is it described somewhere in the books, or left unexplained?

It is not explained in the books, but there is mention of him in AFFC, I believe, when a prison guard mentions that there were three men in the black cells. Ned Stark gave Yoren the pick of the dungeons, which included those three, and presumably Jaqen.

The fan speculation that Jaqen is Syrio Forel is based mostly on wishful thinking, as there is no evidence of that, other than the fact that Syrio might have been captured and Jaqen appears in the black cells at around the same time. And also because he knew Arya's real identity. But like I said above, I believe Jaqen was already in the dungeons when Ned was Hand.

On that note, on the forums of Westeros.org, it has become somewhat of a meme that everyone is Syrio Forel or Jaqen H'ghar. So there are many theories, most of them probably not true.

One theory connected Jaqen with the death of Balon Greyjoy, combined with the prophecy from the Ghost of High Heart:

I dreamt of a man without a face, waiting on a bridge that swayed and swung. On his shoulder perched a drowned crow with seaweed hanging from his wings.

This is likely a faceless man, sent by Euron Greyjoy to push Balon off the bridge described in an early Theon chapter. But I find it unlikely that it would be Jaqen.

I also highly doubt that Jaqen got himself thrown in the black cells on purpose. It is hard to assassinate people while locked up and in chains. A reasonable theory is that he was caught during a mission.

The observant readers will notice that Jaqen's story continues in the books.

In the prologue of AFFC, an alchemist is seen to murder the POV character, and his physical description matches that of Jaqen after he changed his appearance in front of Arya at Harrenhal. Apparently, Jaqen wanted access to the Citadel, for some as of yet undisclosed reason.

It is clear that something is up with Jaqen, but as of yet, we do not know what.

My personal theory is that Jaqen was hired by the Lannisters to ensure that Ned Stark would have an "accident" on his way to the wall. So he went into the dungeon in preparation for that, only Joffrey messed up the plan.

It makes a lot of sense - as a traitor, Ned would of course be put into the cage with the other criminals. And you'd want a skilled assassin to ensure the job gets done (since Ned is no pushover himself), in a way that doesn't look like the Lannisters ordered it.

There is only some indirect evidence: Yoren tells Arya that he was told in advance that Ned would be taking the black, and bribed to stay in King's Landing longer. This could only have been done by the Lannisters or someone in cahoots with them, since Ned taking the black was no announced beforehand. But why would they go to such lengths to ensure he got on Yoren's caravan when they could just have their house guard escort him to the Wall?

I think it's left unexplained in the books, but given the nature of the Faceless Men, it's likely he got caught on purpose in order to accomplish some other task, likely an assassination.

It's not suggested in the books that his purpose was to meet Arya, or that he even knew of her existence before their chance encounter. So yeah, coincidence.

Also note Jaqen wasn't caught by Yoren (the Night's Watch "recruiter"), but was already locked in a cell of the Red Keep at King's Landing.

EDIT: I found some fan speculation in Tower of the Hand that he is actually Syrio Forel, in which case it wouldn't have been a chance encounter, but let me say I find it extremely unconvincing...

George R. R. Martin has been asked this in an interview after A Dance with Dragons was published and dodges the question leaving it open ended as a mystery. Hopefully we'll find out in The Winds of Winter.

How did Jaqen H’ghar wind up in the dungeons of King’s Landing?
Wow, that’s also a mystery (laughs). You really pay attention when you read, don’t you? (laughs) How many theories have you gleaned from these books? (more laughs)
Another New GRRM Interview (Re: future of the series/unanswered mysteries)

My theory is that he was Aryas dancing teacher. He managed to escape changed his face and followed Arya after she left kings landing... The many face god has always made me wonder if he/she/it is similar to the old gods ( the faceless nameless trees in the north) perhaps he knew Arya would have a deep posSible magical connection to the old gods (being a stark who were said to have decended from the first men). Also when you listen to both characters talk they do sound very similar.

I feel that Varys is a Faceless Man as well and Jaqen was sent to meet with Varys to find out what his duties were. He gets arrested to access Varys, who has access to the Black Cells.

From there, Jaqen talks to Varys, knows who to kill and why, and only needs to find a way to escape from Yoren before they get to the wall. After that, he is free to do his duty, whatever that may be.

JayJay
9
1
Add a comment  |
Highly active question. Earn 10 reputation (not counting the association bonus) in order to answer this question. The reputation requirement helps protect this question from spam and non-answer activity.

10
What was Jaqen H'ghar doing in the King's Landing dungeon?
3
Why is Jaqen H'ghar captured in the first place with the other two prisoners if he has such skill?
17
Is Syrio Forel dead?
2
Why is Logan locked in a well at the start of The Wolverine?

23
Do Syrio Forel, Jaqen H'ghar and Melisandre all follow the same religion?
27
Why did Ser Gregor kill Ser Hugh?
12
Why did Yoren recruit Rorge and Biter?
30
Why did Jaqen H'ghar give Arya the iron coin?
13
Why did Stannis join the rebellion?
2
Coincidence Tyrion told Pycelle that Myrcella was going to Dorne ( and then she actually did)?
7
How did people know that Varys is a eunuch?
7
Is there a minimum time in the past that Bran can see?