I watched this movie around end of the 80s. One of the main characters (male) was driving some racing motorcycle which had like computer display board giving various information and feedback. I remember the biker had some guns and could perform various shooting acrobatics while driving the bike. The setting of the movie was like in Mad Max (post-apocalyptic), as I remember a lot of endless desert ambient. There are 2 attractive women dressed with spandex (despite the hot weather), one blonde, one brunette. It could as well be a movie from the 70s (for sure, a B-production), but unfortunately I cannot remember the story line. Almost forgot that there are few soft core scenes here and there. I got this flashback couple of months ago and it's torturing me ever since. Thanks

I finally found out the name of the movie: The final executioner. I strongly appreciate your suggestions, folks. I apologize for some confusing hints I provided, as it’s been more than 20-25 years ago since I watched it for the first time. Few details to highlight:

Is it possible that you're thinking of the 1982 Megaforce?

The story involves two fictional countries, the peaceful Republic of Sardun and their aggressive neighbor Gamibia. Unable to defend themselves from a Gamibian incursion, Sardun sends Major Zara (Persis Khambatta) and General Byrne-White (Edward Mulhare) to ask the help of MegaForce – a secret army composed of international soldiers from throughout the western world, equipped with advanced weapons and vehicles. The MegaForce leader, Commander Ace Hunter (Barry Bostwick), will lead a mission to destroy the Gamibian forces, which are ironically led by his rival, and former military academy friend, Duke Gurerra (Henry Silva).

While Hunter composes an elaborate battle plan to destroy Gurerra's forces, Zara tries out to become a member of MegaForce. As she executes the various tests, Hunter's feelings of affection toward her grow. And while she passes the tests, he is unable to allow her to participate in their raid, because her presence, as an outsider, would disrupt the trust and familiarity of his force.

Eventually, MegaForce successfully para-drops its attack vehicles into Gamibia and Hunter mounts his sneak attack against Gurerra's forces. Although they manage to destroy his base, Gurerra has set a trap for them at the team's only means of escape – a dry lake bed where the cargo planes will pick them up. Gurerra sends his tanks to secure the lake bed while Hunter comes up with a plan to attack Gurerra from behind by crossing over a mountain range the enemy tanks had turned their backs toward.

The plan succeeds, and MegaForce manages to break through Gurerra's tanks, but one of MegaForce's cargo planes is damaged in the process. Having to abandon their high-tech vehicles (which they program to self-destruct), the team successfully makes it on foot to the last plane, except for Hunter. The commander, instead, makes his own dramatic escape on his motorcycle after it deploys airfoils and a rocket motor and catches up with the cargo plane in midair. Although he has lost the battle, Gurerra shows admiration for Hunter's cunning, and he gives his old friend a thumbs up.

It's got high-tech motorcycles, skintight bodysuits (albeit on the men too), and sports a lot of guns and stunt riding.

I'm thinking "Megaforce" is the answer. Not really post-apocalyptic but most of it took place in the desert. Barry Bostwick was indeed sporting facial hair for this one. Unfortunately he was wearing the Spandex. 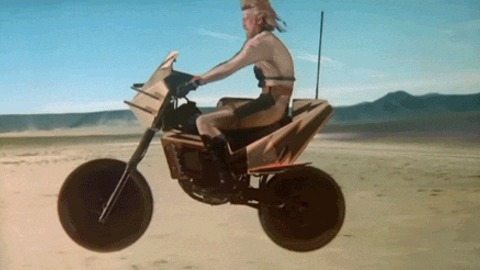 Could it be Deathsport (1978)? It fits the time-frame, David Carradine battles on and off the motorcycle. There are a couple women in it and some soft core scenes. Makes sense it didn't fit. I don't remember the motorcycles a GUI or displaying any info.

It could also be Warrior of the Lost World, which is best watched as an MST3K episode. The hero with the bike is played by that guy from The Paper Chase.

The Rider arrives on his advanced motorcycle with its artificial intelligence computer Einstein. He crashes but manages to pass through the "wall of illusion" and is found and brought back to health by the Enlightened Elders. They have chosen him to lead their fight against the evil Omega, an Orwellian state run by the evil Prossor. The Elders are allied with the resistance movement, the Outsiders. The Rider first helps Nastasia and the other Outsiders by rescuing McWayne, Nastasia's father and leader of the Outsiders. While the Rider and McWayne successfully escape, Nastasia is captured and subjected to brainwashing by Prossor.

It's one of many crappy movies featuring Donald Pleasance, who seems to be rebelling against the terrible direction and trying to turn in a competent performance.

What about Battletruck? It has been many years since I saw it but the hero had a super motorcycle in a post-apocalyptic world. The early 1980s release date works too.

Timerider: The Adventure of Lyle Swann.

It has a motorbike, helmet mounted HUD, beautiful girl and some guns. I am not sure if they were in holster which itself is required to be mounted on aforementioned two wheeled vehicle.

Whole film in a language of fine cuisine