Can you please identify these Marvel characters? 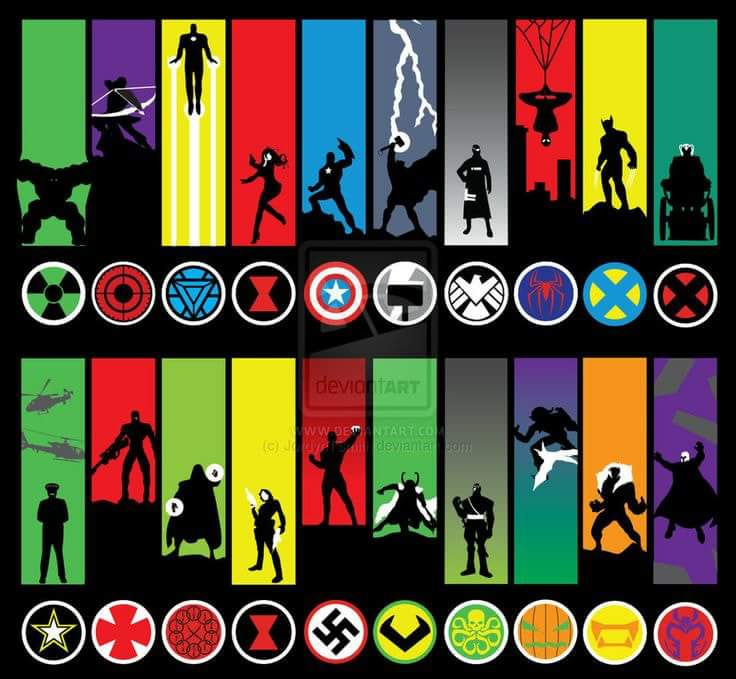 I can identify almost everyone from top row (the hero row) with few confusions. From left:

Talking about bottom row (the villain row), I can identify few. From left:

Can you please identify them?

Community wiki to aggregate answers from other posts, including the original question. Feel free to edit in corrections or URLs. Don't forget to up-vote the source answers.

Following up on my comment it appears that on the top row are "heroes" and on the bottom rows are "arch-nemesis villains" to the corresponding hero above.

Based on our question the ones you have not identified is

Confirmation on those you were unsure on:

Each villain appears to be a direct enemy of the hero above him, that being said here's what I've managed to work out so far:

Still not sure on 1, 2, or 4, I almost thought 2 might have been deadshot but I'm really not sure on that one.

Agree with the community wiki answer except:

The match-ups seem to be heroes (top row) and their arch-enemies (bottom row).

I can see the vague resemblance to Bucky Barnes here, but if it was him I would logically expect his arm to be colored differently, as it's a fitting way to differentiate him. Plus, despite his years as the Winter Soldier, counting him as Natasha's arch-enemy seems a bit off.

The second Black Widow, Yelena Belova, is the most likely candidate, given that she has the same hourglass emblem shown. The art doesn't seem like a good match: she's a blond, and I think has generally been shown with longer hair, where the image would seem to indicate a darker hair color (or else it would be white, like her face), and shorter hair. That said, white is being used to highlight identifying features/trim in the characters (I'm sure the guns aren't white).

Based purely on the image, I could make an argument for Madame Masque (the white highlight on the face would be her identifying mask, of course); but, the Widow emblem wouldn't make any sense there.

This is the Green Goblin, not the Hobgoblin. The glider looks more like GG's; the "horns" on GG's glider were part of a flat faceplate, while the "horns" on Hobgoblin's glider protruded out from the faceplate. More tellingly, Green Goblin's headgear includes a "hat" similar to a conical stocking cap (leaving the ears visible), where Hobgoblin's headgear is more like the hood of a hoodie (covering the ears). You can see the character's pointed left ear, and the trailing point of the cap between his head and right hand.