Has a Star Wars character ever been told the odds and not gone on to beat them? 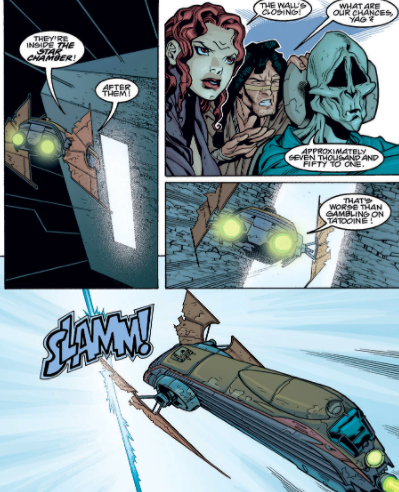 C3-PO: Sir, the possibility of successfully navigating an asteroid field is approximately 3,720 to 1!

K2-SO: There is a ninety-seven point six percent chance of failure.

This happens a lot in Star Wars. Are there any examples of a character failing to do something after being told how unlikely it is that they'll be able to do it successfully?

In the Last Jedi,

Poe, Finn and Rose concocted a plan to find a slicer to disable the First Order's new tracking technology that allowed them to follow the Resistance.

The odds of such a plan succeeding is logically very low, since security is a vital part of any military operation. It must have been statistically inconceivable that people could just fly over and sneak into a warship without detection. Likewise, the chances that some unauthorised person could successfully break into a specially secured room and tamper with vital equipment, again without detection, must be very low.

In fact, we know the odds are poor, because if the First Order is so lax about security, it stands to reason that the Resistance could've infiltrated and destroyed their ships a long time ago. The fact that they didn't demonstrate just how improbable the plan was. Hence, although no exact numbers were made up on the spot calculated,

when Poe finally told Admiral Holdo of their plans, she exclaimed:

"You have bet the survival of the Resistance on bad odds and put us all at risk!?"

The mission ended up failing disastrously, so the statistically likely thing happened.

edit: at the time of writing the question didn't specify that they had to be told the exact numerical odds first (it only asked if the statistically likely thing ever happened). However, I would argue this incident still fits the new requirements, because:

While planning the highly improbable mission, Finn specifically claimed that:

"You can't get through the security shields undetected. Nobody can."

So effectively, he told Rose and himself that the odds of their success were 0 out of infinity. They went on it anyway with the delusion that finding a master codebreaker would somehow beat the odds. It didn't.

Short answer: plenty of them. They did not live to tell the story.

Or they were smart enough not to try, considering the odds.

The most obvious one is when Tarkin disregarded an officer's warning that the rebels have a good chance to destroy the station.

"Evacuate? In our moment of triumph? I think you over-estimate their chances!"

―Tarkin, convinced of the Death Star's invulnerability to the end - quote taken from Wookieepedia

On the example quoted in the question:

C-3PO: Sir, the possibility of successfully navigating an asteroid field is approximately 3,720 to 1!

All Imperial pilots trying to follow the Millennium Falcon have either abandoned the pursuit or were killed (see explosions all around) - thanks to Valorum for the notice. Nobody managed to catch up with the Falcon.

Statistics are for average men. Han Solo is a Hero (i.e. not average) flying one of the best ships in the known Galaxy. Together, they have completed The Kessel Run in 12 parsecs, which is considered impossible and implies Han is far from being an average person. In fact, he is one of the best pilots in the known galaxy.

Droids calculate probabilities, using average person's capabilities (in D&D terms, 9DEX/9STR/9INT, whatever applies here). Moreover, an extremely skilled pilot may take a non-traditional approach to the question, if applicable, which would never be used by a droid.

The Kessel Run was a hyperspace route used by smugglers and unscrupulous freighter captains to move spice from the spice mines of Kessel at the behest of the Pyke Syndicate, who relied on the foolhardy Kessel Runs to deliver the illicit substance to their customers. Han Solo, captain of the Millennium Falcon, claimed to have made the infamous run in less than 12 parsecs, boasting about his ship's ability to endure shorter but more hazardous routes through hyperspace. By doing so, Solo broke a long-held record.

Another example: in The Force Awakens, Han Solo

jumps out of hyperspace behind the shields of the Starkiller Base,

which by all means was considered impossible.

Rogue One - Jyn and her crew were told about improbability of their mission,

but made it, at the cost of their lives

Edit: The Last Jedi - too many examples to quote here, Rebel heroes try desperate actions to save their cause, and fail almost always. Name just two:

Heroes (in Star Wars and similar genre universes) do not die stupid deaths, they die heroically. However, villains may fail to make a reality check in their arrogance - see my example at the beginning of the answer.

Are there any examples of a character failing to do something after being told how unlikely it is that they'll be able to do it successfully?

Surely this has to be a definitive example.

Obi-Wan Kenobi: It's over, Anakin! I have the high ground!

Anakin Skywalker: You underestimate my power!

Not the answer you're looking for? Browse other questions tagged star-wars star-wars-legends mathematics or ask your own question.

22
What was C-3PO basing his odds on?
7
Has a Stanford torus ever been depicted in Star Wars canon?
33
Has any reference been made to Earth or the Milky Way in Star Wars EU?
15
Has the lightsaber cross-guard from the Star Wars 7 teaser trailer been seen before?
24
Has Joker ever mentioned...Star Wars?
11
Has there ever been a Star Wars / Star Trek crossover?
5
How do droids determine chances?
4
Has there ever been a space hotel in the Star Wars universe?
12
Why does a protocol droid know odds and statistics so well?
3
In "Solo: A Star Wars Story" - has the identity of this character been officially confirmed?