Does the Wall have suicide nets?

Whilst doing some research into suicides in the series I've come across the following quotes from people on reddit that claim the Wall has suicide nets.

The Night's Watch has a long history of suicides, they even had "suicide nets" on the Wall at one point to stop people from jumping to their death
(Spoilers All) Have there been any suicides in ASOIAF?

I seem to recall that the 581st Lord Commander had installed "suicide nets" on both sides of the wall, for the whole length of it. It is speculated that as the NW's manpower dwindled (some centuries before the books' events) the nets fell into disrepair because of a reduced builders' corps.
I could be mistaken though...
(Spoilers All) Suicide in the Nights Watch?

I believe the above quotes have come from the books (/r/asoiaf sub reddit) so answers from the books are preferred but in the case of lack of information show answers are fine.

I've had a look around but I can't seem to find any references for this. Does anyone know if the Wall has suicide nets?

I have tweeted Elio and Linda, the co-authors of The World of Ice and Fire, and they have stated no nets. 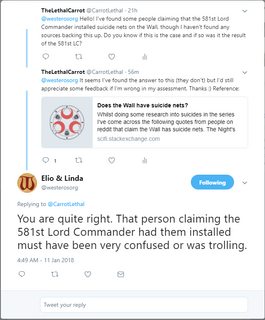 @westerosorg Hello! I've found some people claiming that the 581st Lord Commander installed suicide nets on the Wall, though I haven't found any sources backing this up. Do you know if this is the case and if so was it the result of the 581st LC?
@westerosorg It seems I've found the answer to this (they don't) but I'd still appreciate some feedback if I'm wrong in my assessment. Thanks :)
You are quite right. That person claiming the 581st Lord Commander had them installed must have been very confused or was trolling.
Twitter, westerosorg

However, with that said two canon/semi-canon images I have found of the Wall show no signs of nets. The first one if from the 2011 ASOIAF calander and the second is from The World of Ice and Fire. Both of these images show no nets. 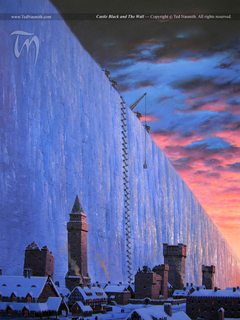 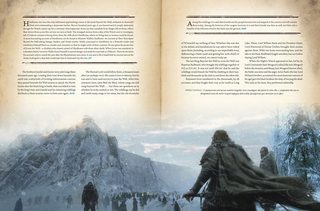 I have found the following quote which would appear to imply there are no nets as the rangers have found fallen corpses.

The Others take them all, thought Jon, as he watched them scramble up the steep slope of the ridge and vanish beneath the trees. It would not be the first time wildlings had scaled the Wall, not even the hundred and first. The patrols stumbled on climbers two or three times a year, and rangers sometimes came on the broken corpses of those who had fallen.
A Storm of Swords, Jon IV

The following quotes also seem to imply there's nothing to stop you from falling to your death.

Donal Noye rounded on him. "Any man here stays his sword, I'll chuck his puckered arse right off this Wall . . . starting with you, Septon. Archers! Do we have any bloody archers?"
A Storm of Swords, Jon VIII

He would make me Lord of Winterfell. The wind was gusting, and Jon felt so light-headed he was half afraid it would blow him off the Wall. "Your Grace," he said, "you forget. I am a Snow, not a Stark."
A Storm of Swords, Jon XI

Three hundred might not be enough. Jon kept that doubt to himself. It was true that climbers were desperately vulnerable whilst on the ascent. Stones and spears and pots of burning pitch could be rained down on them from above, and all they could do was cling desperately to the ice. Sometimes the Wall itself seemed to shake them off, as a dog might shake off fleas. Jon had seen that for himself, when a sheet of ice cracked beneath Val's lover Jarl, sending him to his death.
A Dance with Dragons, Jon II

Again no mention is made of nets on the Wall and we do see several images of it at different locations and perspectives and we never see any nets. There are some more views of the Wall in the show but I think that's enough to prove the point. 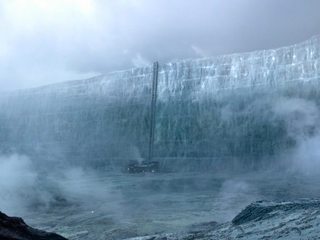 Castle Black, South of the Wall 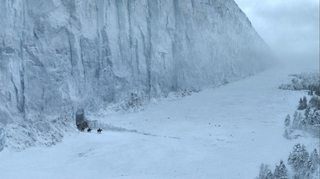 Eastwatch, North of the Wall 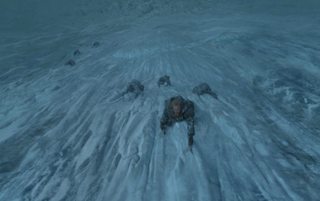 The team climb the Wall 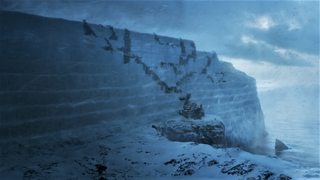 Eastwatch, South of the Wall

However, there are several reasons as to why the Wall won't have nets:

There are also some reasons as to why it would have them:

It does not. If you look at the scene where (Season 7 Episode 6/7 spoilers)

there are no nets that are visible. It may have been true at one point in the history of the north wall but not at the time of the series. This is likely explained by the disrepair. The risk to repair the nets outweighs the benefits of having them and is likely a reason why they are no longer maintained (i.e. more people died trying to repair them then the number of people it saved).

Interestingly, abondoning the night watch is punishable by Death. So even if they were to rescue someone from the net who attempted to leave through suicide, they would be sentenced to death anyways. Which means the Nets are basically pointless.

39
How is canon determined for the works set in the world of ASOIAF?
3
Known suicides in "A Song of Ice And Fire"

34
How is The Wall bypassed?
43
What is Petyr Baelish's endgame with Sansa?
44
Can the Wall be melted?
6
What title does the son of a lord have in A Song of Ice and Fire?
16
How well does the Wall work?
38
How could Craster be that confident?
8
How do Craster's daughters know their sons become White Walkers?
10
Do we ever find out who sent the catspaw after Bran in the show?
11
What is the place where Will was executed?
13
Which Wonders and Wonders Made by Man has Tyrion visited?