Two boys had their holidays in a fishing village. They found a strange pearl in a toy shop that opened a portal to another freaky dimension where a silent girl rode a GIANT white thing (it might've been a dog). The girl was naked but her body had bird-like white feathers all over it except for the head. Another thing I remember is that it had two timelines in it. In the second one they were grown-ups in a restaurant discussing whether it was real or not. I don't remember why, but they somehow damaged the pearl and caused some problems in that pocket dimension.

I watched this in Russia on a VHS cassette. It looked like anime but it might have been from a European studio.

I actually found it (I realized that the girl's name was Mari or something like that). It was Mari Iyagi. 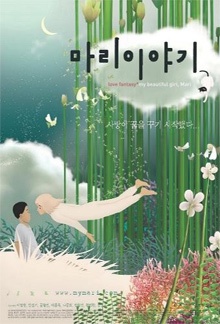 When office worker Nam-woo receives a package from childhood friend Jun-ho it transports him back to their last summer together. Back to their hometown in a small fishing village it the last few days before Jun-ho left for boarding school in Seoul. When a marble and an abandoned lighthouse had the power to transport him to a fantastic world where a mysterious flying girl named Mari lived.