Many years ago I bought a very cheap sci-fi/fantasy book. What I remember:

This reminds me of The Cyborg and the Sorcerers, one of Lawrence Watt-Evans first novels, if not the first. The titular cyborg is a warrior who fights on long after the war has ended, because no one still alive can decommission him. In the first chapter, he lands/crashes on a planet where his ship has detected "gravitational anomalies" -- which turn out to be sorcerers, flying by magic. He's injured in landing, and rescued and magically healed -- and then the real adventure begins.

Excerpt from the first chapter:

He lay back on the acceleration couch and wondered idly whether he had been officially decommissioned, and whether anybody left alive had the authority to decommission him. He had no idea, and there was no way he could find out. He had been under total communications silence when the D-series destroyed Old Earth's military -- and probably its civilization as well -- and since then, of course, there had been no signal at all from his home base on Mars. There could be little doubt that his superiors were all long dead; if the war hadn't killed them, the passage of time would have. The fourteen years of subjective time he had spent in space worked out to about three hundred years of outside time, and he doubted very much that anyone on Old Earth had been making breakthroughs in geriatrics after the war was lost. 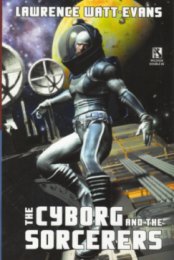 Not the answer you're looking for? Browse other questions tagged story-identification books weapon soft-sci-fi or ask your own question.

8
Book about a boy who travels to a parallel universe to get a book
9
Book about an astronaut who is tasked with investigating the disappearance of a shuttle in the vicinity of a small forest planet
11
Man crashes on planet and is treated nicely by natives, then nastily by another group. Possibly Isaac Asimov story
15
Sci-Fi novel about a man that has the power to make everyone he meets forget him
4
80's sci-fi B movie where an alien, disguised as a human, crash lands in a desert
13
70s/80s Sci-Fi book with teleport gates on sub-light spacecraft and an army space suit
6
Cartoon: spaceship carrying a life-giving crystal crashes on an ocean world, shadowy evil tries to capture it