Why are there unclaimed parts of the world in "The Man in the High Castle"?

The TV series The Man in the High Castle depicts an alternate reality where the Axis won World War II.

In the show, a World Map is shown in some episodes, here is an example: 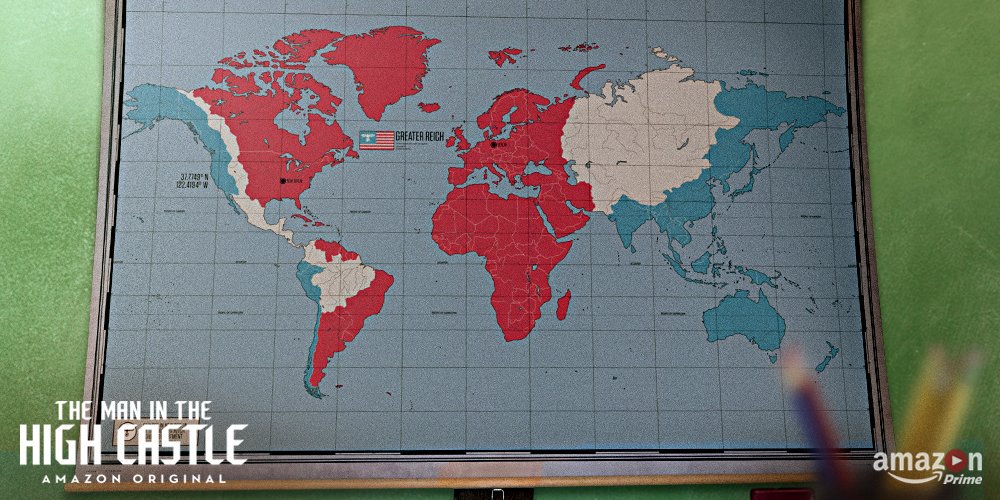 The red areas are the lands of the Greater Nazi Reich, the blue ones form the Japanese Empire, while the white/blank parts apparently are unclaimed lands.

At least in North America, we know that between the Greater Nazi Reich and the Japanese Pacific States this relatively narrow strip of land is a Neutral Zone.

In other parts of the World, these unclaimed lands are way bigger and extended.

Why are these lands unclaimed? The series is set in the Sixties, so if the two superpowers wanted, they had plenty of time after the end of WWII to conquer even these. Is is stated somewhere why such a great part of the world is left unclaimed?

This question is primarily focused on the TV Series, but I accept even answers from the novel. I read it, but many years ago, and I can't remember all the details.

Following the peace conference of 1947, the defeated US government was allowed to form two independent nations in the Rocky mountains, between territories occupied by the Deutsch Reich and the Nipponese Empire. These were weak, economically dependent nations with no military, and little in the way of government. That's the 'buffer zone' in the American continent.

Further south, Mexico and a few of the nations of Central America managed to stay independent and neutral and are the unclaimed land there. True, the Deutsch Reich could have invaded and occupied these, but there was no need for this since partial treaties and trade agreements made these nations subservient to the Deutsch Reich in all but name.

In Africa and the Middle East, the Deutsch Reich did not believe that the blacks or the Arabs (whomever they considered as just a notch above the blacks) were capable of self-rule, and as a matter of policy ensured direct colonization of all these countries.

The CCCP managed to sign a peace treaty during the Deutsch invasion, and were allowed to keep lands east of the Urals... The Germans kept the rich industrial bases and oil fields west of the Urals, and saw no need to invade what remained of the CCCP.

The same is the case with Brazil, where they signed a peace treaty with the Reich and were allowed to keep thick Amazonian jungle territory, while the Germans held on to the prosperous coastal regions.

Afghanistan, having allied with the Germans, was allowed to stay independent, and was given control of the western portion of India which was partitioned. India's Muslims crossed the border to live under Afghan Islamic rule, while its Hindus remained east under Nipponese rule.

Immediately following World War II, The United States and the Soviet Union were at odds during the Cold War. In this alternate reality where the Axis powers won the war, The Third Reich and the Empire of Japan would have likely turned against each other in their own Cold War. These "unclaimed parts" are likely buffer zones which were agreed on by both powers in order to avoid political hostility. Imagine the Berlin Wall or the Demilitarized Zone along the North/South Korean border, but on a much larger scale. Such areas probably have no formal government and may be used as testing for weapons of mass destruction by both superpowers, although they are not necessarily uninhabited. The physical proximity with Third Reich Era Argentina and Japanese occupied Chile would cause conflict.

If you consider the alternate timeline, if we assume WW2 ended roughly at the same time somewhere in the second half of the 1940's, all of these territories could have been considered of extremely low value after the war not worth fighting over and usefull as a buffer...

Asian neutral zone: oil and gas weren't discovered in Siberia or Afghanistan until 1950s or even 60s. So in this world they would have been thinly populated regions with little resources and a harsh climate. If it was decided in the late 40s these would become neutral zones, it stands to reason little or no prospecting would have been done there and these resources were never discovered there in this world. And the rest of the Asian neutral zone is the Tibetan plateau, Gobi desert and Mongolian steppes, again thinly populated areas with little (then) known resources.

Northern America neural zone: follows nearly the rocky mountains, a handy natural barrier between the two remaining powers. Only resource really valuable there is uranium. But even in our universe uranium wasn't found there until 1949! The uranium used for the American bombs in WW2 came from the Congo in Africa... And since the USA never developed the bomb in this universe, it could certainly be assumed the uranium was never mined in the USA neutral zone or was never even discovered. And even if it was known uranium could be found there, it could have been a part of the dividing treaty between Japan and Germany that the uranium would "belong" to neither side, both knowing they could find it somewhere else anyway. And lastly when looking closely at the map, it's even possible the American uranium mines fall just within the German Reich's borders, leaving only "useless" mountainous terrain as buffer.

South American neutral zone: same story as in North America. Neatly follows the Andes, forming a nice mountainous buffer zone without any (then) known valuable resources. That leaves only the Amazon basin which in the 1940s was nothing but a nearly impassable jungle with a very inhospitable climate. Large scale deforestation of the Amazon for farmland only started in the 1960s in our universe. So again it stands to reason that in the alternate mithc universe this area was left as useless and/or too much trouble to exploit, but usefull as a nearly impassable natural barrier.

When you think about it, the neutral zones and their placement do actually make sense... Many of the reasons we now consider these regions "valuable" is because of resources found there after WW2 ended. Without these resources, especially to two fascist superpowers, these regions would be useless areas thinly populated by "untermenschen" only worth "purging" unfortunately...

That map is... Wrong. For one, the Nazis drained the Mediterranean Sea and turned into usable land. And Italy still existed with a minor empire encompassing the Italian peninsula, parts of northern Africa and the Balkans.

The answer is that it makes no sense except as a plot device. The so-called neutral areas are incapable of self-governance. The American frontier from 1783 to 1890 only had governance to the extent that an external power was willing to military and police in it. The labelled neutral zone contains people and resources that could be exploited by the IPS and GNR. In OTL, it would have made no sense either for the Allies and the Soviet Union to leave the territory not occupied by either as of May 8, 1945 as a neutral zone. Both powers agreed to complete zones of occupation leaving no areas in anarchy.

Not the answer you're looking for? Browse other questions tagged tv the-man-in-the-high-castle or ask your own question.