In Princess Mononoke, what was the possible route across Japan that Ashitaka took while investigating the iron ball

I am not familiar with the Japanese landscape and geography, but I'm curious:

In Princess Mononoke, what was the possible route across Japan that Ashitaka took while investigating the iron ball?

Although an exact route can't be known, a rough estimate can still be obtained.

Where did he begin?

Just before Prince Ashitaka leaves his tribe, one of the men in the hut explicitly states that they're the last of the Emishi, and that the remnants of their people have been driven to the East. He also says that it's been 800 years since Japanese emperors have started wiping out their people.

In both cases, the man speaks accurately to what real world history says. Historically speaking, the Emishi are known to of resided in the northeast region of Japan, Tōhoku. Additionally, the Emishi had begun showing resistance against Japanese emperors during the 7th and 10th centuries AD, which is roughly 800 years before the film takes place. 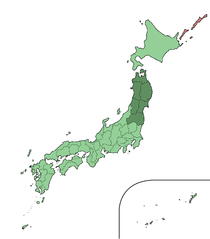 It's then safe to say that Ashitaka began his journey in the Tōhoku region of Japan, though, there's no way of knowing where within the region his tribe was located.

Where did he arrive?

To again reference the scene where Ashitaka is about to leave his tribe, Hī-sama says:

Hī-SAMA: The stones tell me the Boar God came from far to the west.

There is evil at work in the land to the west, Prince Ashitaka. It is your fate to go there and see what you can see with eyes unclouded by hate.

And then, fast-forwarding to the night that Ashitaka actually arrives at Irontown, one townsmen mentions how they've continuously been looking for iron sand, with the town eventually tearing down the forest to do so.

From what Hī-sama said about Ashitaka needing to head far west, and, from the references to iron sand with respect to that time period, Ashitaka's destination was in the Chūgoku region of Japan. 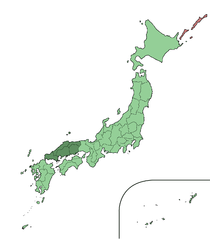 Ashitaka began in the northeast region of Tōhoku, possibly traveled first through Kantō, but then definitely traveled through Chūbu and then Kansai, to finally arrive in Chūgoku.

what is the probable location of Iron Town?

Irontown is located somewhere in the Chūgoku region of Japan, at the base of a mountain, next to a small lake.

After getting on Google Earth and viewing a 3D map of the region, there're literally dozens of potential areas that fit this description.

What region of Japan was the eastern forest mentioned in the movie?

I'm not sure there was any mentioning of an eastern forest, per se, but the forest that Irontown was destroying - and that Princess Mononoke, the animals, Forest Spirit, etc., were living in - is some portion of the forest that covers the Chūgoku Mountains.

It's well documented that a great amount of inspiration for the design of the forest in the film came from the forests of Yakushima.

Not the answer you're looking for? Browse other questions tagged studio-ghibli princess-mononoke or ask your own question.