I asked this question about a comic book I read back in the 1960s and got a quick answer.

Another comic book I read back in the 1960s, possibly as part of the same bunch of old comic books, had the Blackhawk Squadron on a moon base for some reason (Nazis on the Moon?) They were stalked by a killer robot if I remember correctly.

I believe they dosed the killer robot with flammable liquids and set it on fire and destroyed it. Can anyone identify that comic? This time I don't already know the answer and would like to know more about that story.

In Modern Comics # 99, 1950, the Blackhawks go to the moon to establish a moon base and find that enemy agents have already built a base there. But there is no killer robot there.

Fuzzyboots suggested it might be Blackhawk # 1.221, "The Moon Monster" June 1966. According to the synopsis I read, the Blackhawks didn't actually get to the moon, though they did fight the "moonster" inside his spaceship that looked like the moon.

So I am still seeking for the story I remember.

Could this be Blackhawk Vol 1.221, "The Moon Monster"? It featured "The Moonster" and was originally released in June, 1966. 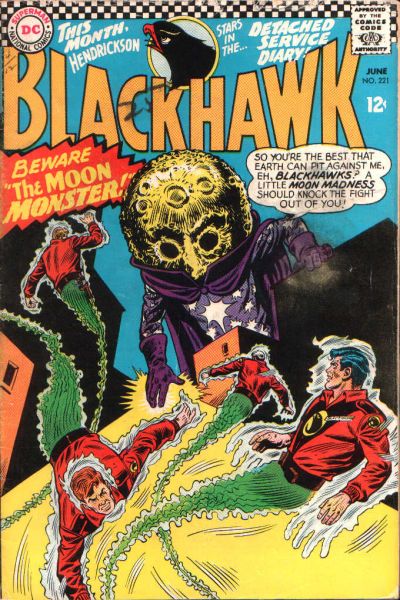 Here's part of one person's review of it:

Right at the very edge of Earth's ionosphere, however the rocket in question crashes into the moon.

With an audible CLONK.

... and then the two gigantic metal robot arms pop out of their special hatch, see, and...

... well obviously, we're not dealing with the four-color equivalent of Tom Wolfe's THE RIGHT STUFF, here. (Or even Ron Howard's APOLLO 13, for that matter. I'm just sayin', is all, here.)

And you all wonder how Grant Morrison got that way.

We cut to within the artificial satellite, then... and get to take that first, all-important gander at this issue's incredible, awe-inspiring super- baddie.

"One would think," the poofy little crater-faced guy in the skirt loudly declaims, to no one in particular; "... that the Earthlings might tire of trying to reach the moon... tire of losing valuable ships..."

("One would think," an eight-year-old Unca Cheeks remembers musing, at the time, "that grown men would feel at least some lingering sense of shame over chiseling twelve cents, American, out of poor, whey-faced and innocent li'l kids with crap like this.")

Suddenly, the rocket ship disgorges (and, boy, do I ever sympathize with how the rocket feels) seven space-suited and helmeted Blackhawks.

I searched for blackhawk "moon base" and found "Earth's Moon", which mentions their adventure:

The Blackhawk Squadron was sent to the moon to deal with a giant mutated human scientist. This "Moonster" flew a moon-shaped spaceship and had very advanced technology, which he used for sabotaging the space program. The Blackhawks were eventually able to shoot down his ship, and the Moonster reverted to his human form.

Not the answer you're looking for? Browse other questions tagged story-identification comics robots moon or ask your own question.

8
Trying to remember a short story (part of a universe anthology?) about a killer created by a faulty mothering robot
2
Which superheroes went to Agartha (or Attilan)?
35
Comic book short story where a couple of robots take off their metal skin and get eaten by bugs
9
Old book about space travel c. 1930-1960
5
Old comic book, war with the moon, Pan-ku Chinese first man
4
The origin of the Moon: Comic book