Were speeder bikes originally part of the attack on Jabba's sail barge?

The website Prop Store has a wealth of fan-captured set photos from the desert set where the attack on Jabba's sail barge was filmed for Return of the Jedi. One of the photos depicts at least four speeder bikes parked on the set. 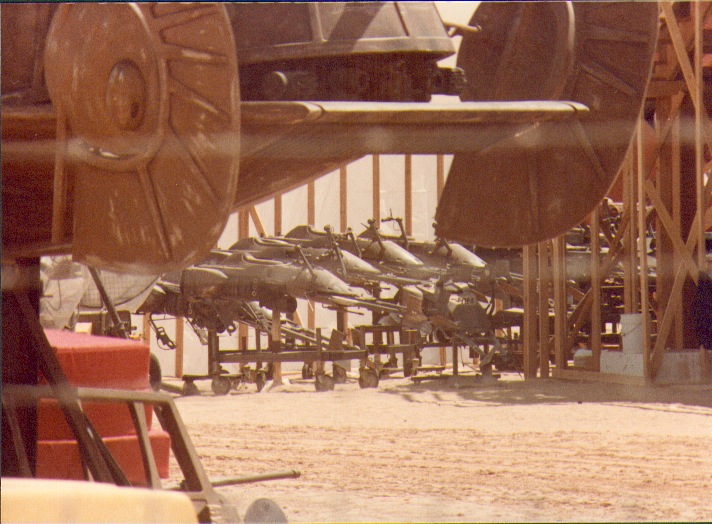 EDITED TO ADD: DVK answered the question I asked but, I have one more nagging sub-question. Since the speeder bikes were built in California, what are these things? Are they unused vehicles?

Yes, they are speeder Bikes.

No, they were never intended for use in any of the Tatooine scenes.

Jump on down to comment #19 where the person who took the photos (it's a little confusing, but user "micdavis" also provided the photos) has dug up the reason:

It took me 25 years to find out, but the speeder bikes were there simply because they were on the same trucks with the skiffs, from the manufacturers. So they stored them under the platform until they moved on to Crescent City, CA for the Endor scenes.

No. there were no external forces attacking Jabba on the barge (on Imperial speeder bikes or otherwise) - only the Luke/Leia/Han/Lando/Chewie group that Jabba brought with him on the skiffs.

The first time the speeder bike appears in trhe ROTJ script, as you noted, was on the Moon of Endor:

The second scout jumps on his speeder bike and takes off, but Chewie gets off a shot on his crossbow laser weapon, causing the scout to crash into a tree. Han and Scout #1 are in a rousing fistfight.

An extra confirmation is from an interview with Kit West, who was responsible for the mechanical effects in ROTJ:

Q: You were the mechanical supervisor for Return of the Jedi. What was your exact task and how did your days look?

After completing all the location reccees in Arizona and the Redwood Forest in California, I returned to my base at Elstree Studios in England and signed on most of my crew from Raiders of the Lost Ark. We prepared all the mechanical, atmospheric and pyrotechnic effects that were to be filmed on the sound stages in Elstree Studios, then concentrated on all the major mechanical rigs required in the States.

We built all the speeder bikes and their travelling and gimble mechanisms for shooting on location in the Redwoods, and the bluescreen shooting at ILM Studios in San Rafael. Also built in the UK was the hover skiff which floated over the Sarlacc Pit, next to Jabba's Sail Barge in the deserts of Yuma. This also included all the gimble support mechanism controlled by hydraulics.

Another confirmation is here (by Howard Kazanjian, ROTJ producer):

The amazing speeder bike sequence would be created at ILM; the bikes were built nearby. A new handheld VistaVision camera would be designed and built to shoot the plates in Crescent City, California, the redwood forest.

44
Is Leia a better shot than Han and Luke?

15
Were Luke and Leia originally planned to be related?
14
Were the Sith originally Called “The Damned?”
20
How did R2D2 smuggle the lightsaber into Jabba's palace?
5
Why can Imperial Speeder Bikes jam Imperial Comlinks?
11
Were the Knights of Ren originally part of the dark or light side?
10
Who's the guy in the snow-speeder?
10
How many systems were part of the Republic?
8
Were Obi-Wan Kenobi and Yoda (originally) the only Jedi to survive?
8
Why attack the door when you can attack the frame?
3
Did Max Rebo die on the sand barge?