What feature film had a giant metal military statue which moved, in front of a building?

I am trying to identify a SciFi feature film I saw perhaps five to ten years ago. The setting was on another planet, there was a dark theme, and there was a large building with a giant metal statue which was articulated - it moved. The statue had an imposing appearance, like a warrior or deity.

What keeps bringing this to mind are the large metal statues (shown below) at the Macau Studio City Hotel and Casino. I believe the statue in the film looked quite similar, but that's all I've got. 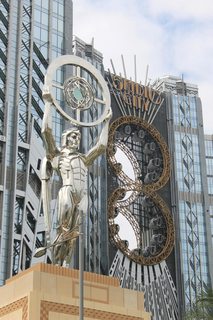 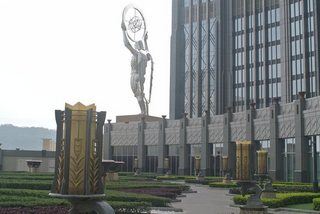 above left: From leisureopportunities.co.uk. right: From tripadvisor.com. 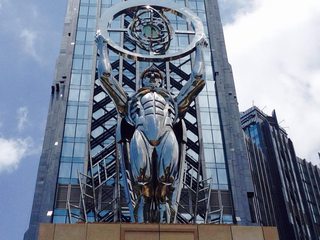 The Chronicles of Riddick (2004) has statuary and other objects (spacecraft and weaponry) that feature such imagery.

15
People running into the shadows to hide from killer sunlight, climbing scene

10
What film or TV episode had breathing bags in it?
10
What 70s film has astronauts entering an old alien building?
4
What kids film had two flying spheres, one red, one yellow?
4
Which film had “See something, say something” billboard with Muslim woman's face?
0
What is the connection between the “Ghost in the Shell” (not-)Aphex Twin YouTube and upcoming Feature Film?
5
Male and female protagonists explore giant building with seated statue. Smoke spells out cryptic messages
29
What vintage movie had this blue floating holographic head talking to some kind of military installation?
6
Damsel in distress adventure/fantasy movie
8
Film with giant tentacled red aliens which show up at sunrise/sunset, their touch is deadly