Does Abram-verse Trek acknowledge the different physical appearences of the crew?

In Star Trek (2009), original Spock meets alternate timeline Spock, Kirk, and Scott who look nothing like the Prime characters at that age. Later, in Star Trek Beyond (2016) , Spock views an image of Spock Prime and the Prime universe crew.

The in-real-life cast members in TOS obviously look different from the alternate timeline.

Has the irl difference ever been addressed, explained away in universe (comic or film) in a technobabble manner? "DNA randomness in the parallel universes, etc..." or are we, as the viewer, intended to suspend belief and assume the characters are actually visually the same (like in the Mirror Universe)? 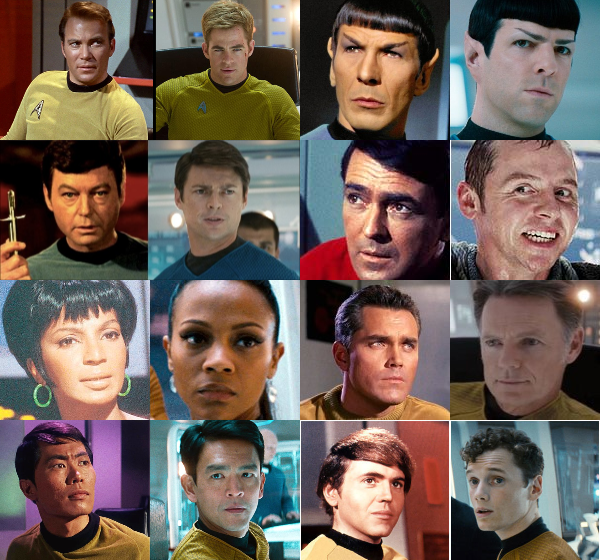 The computer can't seem to tell the difference between the two Spock faces, which would suggest that canon-wise, the faces haven't changed.

Did you ever hear of a frame story? That is an almost totally obsolete storytelling technique used in old time stories like, for example, Frankenstein: or, The Modern Prometheus (1818), a short story that explains how the writer learned of the events in the main story.

When we read or watch a work of fiction, we suspend our disbelief and sort of kind of believe that the fiction is, in some sense, sort of real. But we don't forget about the real world. If the fictional setting of the story is too different from what we know of the real world there is a degree of need for an explanation for the differences.

If a story is set in the distant past, the frame story could be that an ancient manuscript telling the story has been discovered, or maybe that the writers read a bunch of history books written in ancient times that told the story. So if a story is set in the past, we can easily imagine a rather simple frame story that explains how the events are known in the present.

And such possible frame stories vary greatly in how much of what we see is "actually" true future data and how much is "actually" contemporary attempts to depict the future based on incomplete data.

On one extreme Star Trek episodes could be actual record tapes made in the future and edited in the present into episode or movie length. That would make them very accurate. On another extreme, Star Trek episodes might be based on mission reports from the future that were used to write teleplays, and all the visual and sound aspects of the episodes are contemporary attempts to depict the future and not really canon.

If Star Trek episodes and movies are record tapes of future events somehow sent back in time to our era and edited into episode and movie lengths, then the look of everything is 100 percent accurate and the differences between the appearances of the two sets of actors is a real problem to be investigated.

On the other hand, if Star Trek episodes and movies were produced in the ordinary 20th and 21st century way, but were based on future mission reports sent back in time to the present somehow, only the plot elements dictated by those 23rd century mission reports would be accurate and canonical and the looks of everything, including the appearance of the characters, would be due to 20th century TV and movie production and not canonical data.

(And of course Shakespeare's play MacBeth is based on various history books available in his time, which were based on earlier history books, and so on back for five hundred years to the actual historical events which inspired MacBeth, though it would be possible to write a play that was far closer to the real history than MacBeth is.)

And it is perfectly possible to imagine a frame story for Star Trek in which many Starfleet mission reports and logs have been sent from the future into the present and are used as the scripts for filming episodes and movies based on the future history in those reports. So the Star Trek plots might be almost 100 percent accurate, just as the plots of most productions of MacBeth are faithful to Shakespeare's play, but the visual details - including the faces of the characters - would be more or less arbitrarily chosen by the 20th and 21st century movie and TV creators and not really part of the canon, any more than the appearances of the actors in a particular production of MacBeth are canonical to Shakespeare's play MacBeth.

The fact that the computer on Old Spock's ship seems to use facial recognition and voice print to accept new Spock, as pointed out by Kevin Laity, indicates that they have identical genes, including the genes that control voice and appearance, and thus their faces are supposed to be same and that visual details like the faces of the characters are not canon, and thus that the frame story of Star Trek is that reports were sent into the past, not actual visual record tapes.

Until and unless an example is found of a comment about different faces in New Trek and Old Trek the default assumption should be that the faces are the same in the story, and that the frame story of Star Trek is that reports were sent into the past, not actual visual record tapes.

There are no physical differences.

In-universe, James T Kirk does not resemble either William Shatner or Chris Pine. Or, if he does, it's by extreme co-incidence and only to one of them.

That being said, the premise of the new "alternate universe" is that the introduction of Ambassador Spock and Nero altered the timeline enough to cause a ripple effect forwards (and, according to the producers to explain the apparent change in technology, Enterprise construction history etc, this effect also rippled back in time somehow); there is sufficient scope in this explanation to claim that the DNA of our main characters isn't exactly what it was in the prime universe. However, if you're looking for this to be stated explicitly, you're going to be disappointed.

What impact would there be on suspension of disbelief if the movie spent it's time explaining every difference between the movie, any previous movie and any previous TV series associated with Star Trek where there could be a potential conflict ?

As a fan of most of the Star Trek series and movies, I was not particularly enchanted by the many changes. But they were done to entertain a different and younger audience, and I accept that because that's all it is : entertainment. It requires suspension of disbelief to work and there would be none if it spent it's time mired in explanations to fans of previous series.

This would be rather like having e.g. the script writers for Elementary constantly explain why their Sherlock and Watson and everything else is not the same as Basil Rathbone et al (and a hundred other interpretations of the stories, not to say the stories themselves).

You are the audience. You can accept or reject differences, but expecting them to be "justified" would break suspension of disbelief.

The only show I ever saw try this was a comedy crime show called "Due South" where the main character pointedly kept saying that his partner was not his partner because he was different (when they replaced the actor). But that was a comedy - it was done in an offbeat way and worked OK. Doing it in something that was supposed to be serious would be a disaster.

So TV and Movie Production 101 - Thou Shalt Not Break The Suspension Of Disbelief By Pointing At It.

Ever. On Fear of Cancellation.

Clearly you're expected to suspend disbelief.

There are many examples of this in cinema and TV. James Bond is probably the most famous example - not only are we expected to believe this is the same person, but we are expected to do this in spite of the recasting being a significant news event. It's easy to find more examples, but that would just be a long, pointless list.

More than that, it is so standard as to be a dramatic convention which audiences are expected to accept. The very fact of remarking on it could only be done by someone who does not understand the basic dramatic conventions of film and TV.

Not the answer you're looking for? Browse other questions tagged star-trek star-trek-reboot or ask your own question.

23
Does the new Star Trek timeline have a new mirror universe as well?
12
Why did the Kelvin look like a reboot starship
6
How many alternate Star Trek timelines have been presented to us onscreen in the Franchise?
7
Robert April in the alternate timeline
30
Which character in Star Trek has been played by the most actors?
10
Why is the Star Trek 2009 reboot called a reboot?
3
What reality has more advanced technology?
3
Does Michael Burnham exist in the Kelvin timeline?