Identify this series: genetically modified animals, indistinguishable from humans, as soldiers and servants

1960's series involving genetically modified animals to serve as soldiers and servants. They were indistinguishable from humans except for a mandated mark on the palm of the hands. The author (who I can't recall) was fairly well known at the time.

Ten millennia had passed since the creation of the Beasts, and those ten thousand years had obliterated the original purpose of Adam December and the construct surgeons.

Ten millennia had passed since the word WAR was forgotten and remembered; and that word wiped out ten thousand years of peaceful coexistence.

Ten millennia, one thousand decades, ten thousand years .. and for the first time Humans and Beasts were dying throughout the galaxy.

But it should have been expected: man had created the Beasts in his own image, and unfortunately, the Beasts were just like him.

The first of the brilliant science fiction trilogy of the Dies Irae, by the talented author of CRADLE OF THE SUN

The other two books in the trilogy are:

Check out the other covers and see if they look familiar. 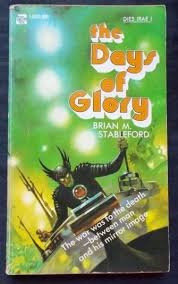 7
What book trilogy has wolf-like aliens seeking help from humans in a war?
16
Sci-fi series: humans are immune to telepathy, become soldiers for an alien group fighting against invertebrate telepaths
6
Steampunk book about alternate universe World War I
19
Book series about a future where gene-modified sentient animals were used as soldiers and are trying to find a place in post-war human society
11
Military sf short story: something like super-infantry on a raid
4
Identifying collection of (related) sci-fi short stories with general theme(s) of prejudice/freedom
8
Earth as Water World, invasion at climax, fought off
6
1950s/60s sci-fi novel about the Mohorovic Discontinuity (Project Moho)
9
SciFi story involving genetically modified servants