So, I'm wracking my brain trying to track down this book. I read this when I was 12 or 14, could be a YA fantasy novel since there was no hanky panky, but there was a serious romantic theme in the second half.

Part 1 is the chronicle of the female protagonist's role in the rebellion of smallest province, in a land of old dead magic, somewhat forbidden. She is one of the heirs to that province and the kingdom (as is later found out). She is caught in one of the animal traps that her rebels set up, and her survival depends on her interrogator, who subsequently agrees with the rebellion and is the reason for the end of that civil war. The reason for the rebellion had something to do with the tree people who had made a treaty with the humans generations before to never cut any trees, in return the humans were provided with magical fire sticks for heat. There were also few solid doors, and most entryways were covered by a curtain.

Part two is the female protagonist's clumsy navigation of the political scene in the capital, where there sits a golden wood throne, made of the magical wood of the tree people. Magic is forbidden or frowned upon, not quite sure, but she stumbles upon the plot of one of the courtiers building his magic to overthrow the shaky rule of whoever it is, maybe a democratic rule at that point. The supposed antagonist is the Marquise, he is usually wearing black or some such, and he ends up being the heroic counterpart to the fumbling heroine. At the culmination she defends the tree people, heading off a massacre of them, afterward finding out that the Marquise was her secret pen pal in the palace, and her dear love.

It sure feels like a young adult romantic fantasy, but it was longer than usual for a YA novel. I'll be so glad to find this book; it's one of those haunting reads that leaves an addictive taste in my mind.

Many thanks in advance!!

I think this may be Crown Duel by Sherwood Smith. 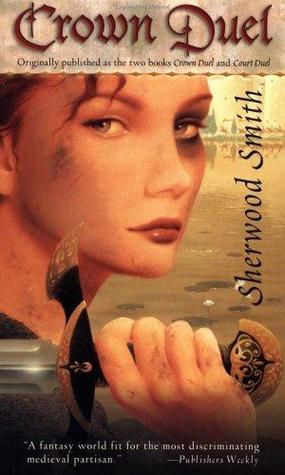 Young Countess Meliara swears to her dying father that she and her brother will defend their people from the growing greed of the king. That promise leads them into a war for which they are ill-prepared, which threatens the very people they are trying to protect. But war is simple compared to what follows, in peacetime. Meliara is summoned to live at the royal palace, where friends and enemies look alike, and intrigue fills the dance halls and the drawing rooms. If she is to survive, Meliara must learn a whole new way of fighting-with wits and words and secret alliances.

In war, at least, she knew in whom she could trust. Now she can trust no one.

It was originally a two book series, Crown Duel and Court Duel, which would account for your memory of its length (427 pages in the omnibus, which also includes a short story). Indeed, the first book is her fighting directly. The second book is her political fight in court. One of her contenders is Vidandric the Marquis of Shevrath. And the prologue describes the "tree people" and "fire sticks".

I HOPE ANY OF MY DESCENDANTS READING THIS KNOW exactly what the Covenant and the Code of War are, but there is always the chance that my story has been copied by the scribes and taken to another land that will consider Remalna distant and its customs strange.

The Covenant has to do with wood—and with Fire Sticks.

We share the land with the Hill Folk. They were here before our people came. One legend has it they were once trees, given human form by some powerful sorcerer. They certainly look more like trees than they do like people. Other stories insist they came through one of the fabled World Gates and settled here because of our trees.

FWIW, I found it by going to books.Google.com and typing in fantasy novel Marquise. ^_^ That was not the first search term I tried, of course, but it is the one that worked. Then, I searched for key words such as "trap" and "rebel". Then, I realized I had an electronic copy on my computer and I copied the prologue in.

Not the answer you're looking for? Browse other questions tagged story-identification novel young-adult magical-creatures romantic-interest or ask your own question.

5
Novel, group transported to a fantasy world, wild/chaos magic
8
Girl with magic confronts a demon and heals tree
7
Fantasy book - Woman from our world winds up in a fantasy world, meets chosen one, beats him in singing contest and wins cup
9
Fantasy novel where characters have gemstones implanted in their bodies. Female baddie is trying to 'harvest' them
8
Dragons, People, Shape shifting, A book forgotten
7
Fantasy book series about persecuted people with elemental magic powers