Was Asgard ever invaded by Galactus?

I haven't come across any comic books about this (as far as I've read) but, by any chance, did Galactus ever invade Asgard? If yes, what was the outcome? How was Asgard saved from the Devourer of Worlds?

PS: I welcome any reading suggestions (if any) related to this topic too.

With the details provided by J Doe, I was able to collect some information. 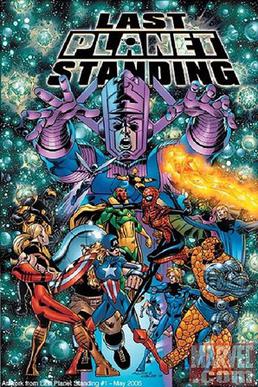 One of Galactus's heralds: Dominas-the Wavemaster enters the Shi'ar Imperial Throneworld and wreaks havoc. After completely overthrowing the imperial guards, Galactus is summoned. Despite the efforts, Galactus's elemental converter drains the planet dry and the once well-known planet now is left lifeless. Galactus then reveals to his herald Dominas that he no longer desires to merely sate his hunger; he now wishes to gather energy with the intention of evolving to the next level. And to do so, he need to consume the eternal realm of Asgard itself.

Dominas attacks Asgard where he faces Thor. Thor leads his mighty warriors into battle against Galactus's herald. During the battle, the Asgardians are defeated, and Thor is taken prisoner (He was later made into a hearld of Galactus in a What if storyline mentioned here). Dominas then retrieves the Over-sword. According to Marvel:

It is a special weapon; a giant-sized sword that, if ever unsheathed, it was said, that "the end of the universe is at hand".

With the help of the Over-sword (also called the Odinsword), Galactus absorbs the life-force holding the eternal realm. And so falls Asgard: The Realm Eternal, the Golden Realm.

Not the answer you're looking for? Browse other questions tagged marvel thor-marvel galactus or ask your own question.