I'd like to make a disclaimer that I remember very little about this book or when I read it (I think I read it sometime in the late 90's or early 2000's), so it'll probably be difficult to figure out what it is, but it's bothered me on occasion for a few years.

I want to say that it's from the 90's, but it could be later or much earlier than that. I really only remember bits and pieces of it, primarily the beginning. It starts out in the woods, where someone is running away from/stumbles upon a cult ritual. The cult members are wearing red cloaks, and I think that they catch the person and kill them. The main part of the book starts with a kid moving in to his uncle's(?) house.

Aside from this I really can't remember much, but I think at one point the kid navigates a maze that has a lot of trials along the way, and I think a mountain plays a significant role, but I could be completely wrong.

I believe the book was part of a series. If so, in one of the subsequent books there are alien spacecraft.

I think the cover was black and white with a drawing/print of a house on it.

I've also asked this question on r/whatsthatbook to no avail, so I figured I'd make an account and ask here since you guys seem to be pretty good at figuring this stuff out.

The most important aspect of the story is the beginning that I mentioned earlier. It's the one part that I know happened for sure, and the main reason I'm trying to find it.

When Brian and Gregory receive an invitation to stay at a distant relative's strange manse . . . well, they should know better than to go, since this is a middle-grade adventure novel. But they go anyway. Why not? Once there, they stumble upon The Game of Sunken Places, a board game that mirrors a greater game in which they have suddenly become players. Soon the boys are dealing with attitudinal trolls, warring kingdoms, and some very starchy britches. Luckily, they have wit, deadpan observation, and a keen sense of adventure on their side.

The boys are visiting Gregory's Uncle Max, who is pretty strange, and cousin Prudence, who is quiet and withdrawn to the point of catatonia.

Google Books has a preview and the prologue has this passage (taken from the middle of the prologue):

Milton Deatley saw a light through the forest.

Carefully, he moved toward it. He put down his feet quietly, but there were twigs on the path that snapped.

The light was a fire. He could see the rippling shadows of flame.

He walked toward it, crouched.

He came to the verge of a a clearing in the pines. He huddled there, squatting close to the ground, ready to run.

The fire was from an abandoned snowmobile. Someone had poured oil on I and had thrown on a match. It lit up the clearing. By its light, Milton Deatley could see the screaming ritual.

There was a mound, a tall, steep hillock. And on its sides were scattered people in robes, with hoods that hid their faces. Their arms were stiff at their sides. Their mouths could be seen when they opened them to scream.

Before them stood a figure in a robe. He had some kind of tablet, a mystical tablet, lying before him, and he pointed to it by the light of the burning Ski-doo. Each time he pointed to a different square on the tablet, someone new shrieked. It seemed like an alien kind of singing. Then the keening-master would raise his hand, and pour more oil on the fire from a watering can. The fire would flare.

The cover I remember is this, but several show the same picture, but more colorful. 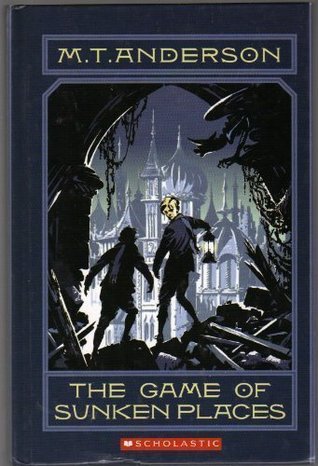 The twist at the end of the first book:

Prudence is the one running the game for the 2 boys, which is why she's been so distracted and withdrawn as she was concentrating on the game. The boys have actually been playing against each other, and everyone else has been an automaton controlled by her.

It is the first of 4 books. I've not read the others, but the copy from the fourth book refers to the second one like this:

They've gone to investigate intergalactic suburban sprawl that was infringing on the Vermont forests, and landed in the empire of New Norumbega inside the huge body of an alien.

Not the answer you're looking for? Browse other questions tagged story-identification books young-adult soft-sci-fi or ask your own question.

8
Book (part of a trilogy?), main character teleports to another world where his heart issues are fixed; the covers showed an eye
6
book identification about kid turning into plant
7
Fantasy book: Street kid who trains to become a dueler
5
Fantasy story series about a boy from a village who has adventures around the world
4
Name of a fantasy or sci-fi graphic novel about a boy in a coma
7
Book about a kid in VR sci-fi
6
Looking for Fantasy book about Fish/Whale Oil
7
Fantasy or sci-fi book involving cats and their philosophy
9
Fantasy book trilogy about painting