What is the meteor/rock protruding from the Red Dwarf?

I've been watching the later seasons of the show, and in some shots of the ship's model it looks like a section has merged with a meteor or some sort of rock. 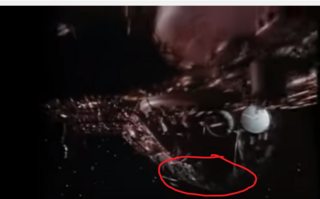 Was Red Dwarf, at some point in its history, struck by an asteroid that lodged in its hull?

According to the show's model-maker, the asteroid hit the Red Dwarf significantly before everyone died.

"Rob and Doug didn't want it to look like a sophisticated spaceship – they wanted it to look like something that had been around for donkey's years," recalled Wragg of his brief. "A meteorite had embedded itself in it – so they left it there!"

and from the same interview

“Rob and Doug had this idea about the ram scoop at the front which sucked meteorites, etc. in; [in line with] the fact that it was a mining vessel.“ Thus, it’s clear that despite the original concept of the embedded asteroid being used for mining, the final model was built with the idea that it had been an accidental strike.

This was also addressed in the Red Dwarf book "Infinity Welcomes Careful Drivers".

A huge, shadowy carbuncle jutted out a mile or so from the red monster's belly - a small moon, torn out of orbit, had flung itself into the ship's solar plexus and was now embedded in the hull, hanging there like a giant stone leech.

Other, lower canon interpretations (mostly from concept art stills and interviews) are discussed in detail here including the idea that the asteroid is being mined and that it was intentionally captured.

Red Dwarf is a mining ship owned by the Jupiter Mining Corporation. The asteroid(s) we see attached to the hull of the ship are being mined. Wikipedia cites DVD commentary for this:

"So in the end, that's why there's two asteroid bays on the new Red Dwarf."