What is the meaning of House Targaryen's sigil?

House Targaryen is one of the greatest houses of the Westeros which ruled the seven kingdoms for nearly three centuries. The house is associated with the dragons. Their Sigil is a three headed dragon on a black background. 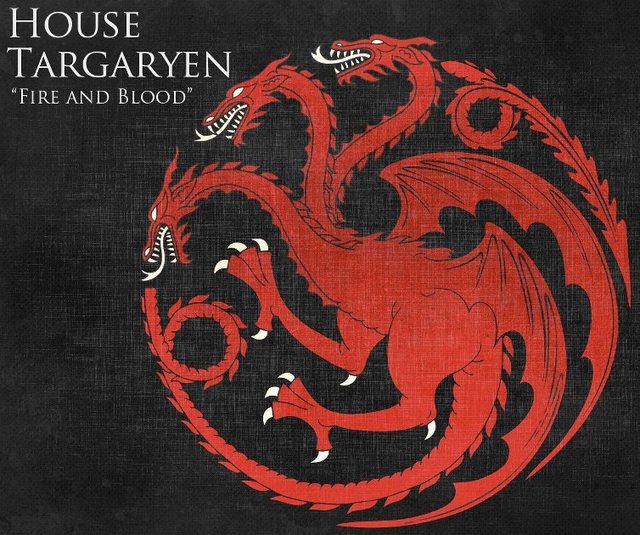 What is the meaning of this Sigil? What does the red three headed Dragon on a black field mean? Is there any significance?

It is a three headed dragon which stand for the three conquering dragons which were:

Since they are born of the same parents, they are one, but three. So therefore, a single dragon with three heads.

“The dragon has three heads,” she sighed. “Do you know what that means, Jorah?”

“Your Grace? The sigil of House Targaryen is a three-headed dragon, red on black.”

“I know that. But there are no three-headed dragons.”

“The three heads were Aegon and his sisters.”

“Visenya and Rhaenys,” she recalled. “I am descended from Aegon and Rhaenys through their son Aenys and their grandson Jaehaerys.”
ACOK- Daenerys V

But of course we can say that Jorah may have been mistaken about it but there is nothing to indicate that he was.

In any case, there you have it. Three Conquerors, one realm. Three Royals, one Kingdom. Three persons, one family.

Why choose that device?

They chose it when they started conquering Westeros just to show their new subjects that they were adopting Westerosi customs and culture. The Targaryens did not have that sigil or any sigil at all prior to the conquest.

Heraldic banners had long been a tradition amongst the lords of Westeros, but such had never been used by the dragonlords of old Valyria. When Aegon’s knights unfurled his great silken battle standard, with a red three-headed dragon breathing fire upon a black field, the lords took it for a sign that he was now truly one of them, a worthy high king for Westeros.
TWOIAF- The Reign of the Dragons: The Conquest

Since Draconic symbols were associated with Valyria, a Dragon seems like a good choice for a heraldic device.

They did have words prior to that (Fire and Blood), which can be assumed to be, because Princess Meria Martell knew those words when Rhaenys threatened her with them.

"I will not fight you," Princess Meria told Rhaenys, "nor will I kneel to you. Dorne has no king. Tell your brother that."

"I shall," Rhaenys replied, "but we will come again, Princess, and the next time we shall come with fire and blood."

"Your words," said Princess Meria. "Ours are Unbowed, Unbent, Unbroken. You may burn us, my lady...but you will not bend us, break us, or make us bow. This is Dorne. You are not wanted here. Return at your peril."
TWOIAF- The Reign of the Dragons: The Conquest

Must be noted, however, that in ASOS Daenerys mistakenly thought that "Blood and Fire" were the Targaryen words.

The choice of the colors, Red and Black, may have been due to their Valyrian background. Everything the Valyrians accomplished was due to the fire of their dragons and blood magic.

What feeds a dragon's fire? All Valyrian sorcery was rooted in blood or fire.
AFFC- Samwell V

Since red is associated with fire/blood and black is the color of soot (And also the fire of Balerion), that choice seems apt. However we must note this is my own speculation, GRRM is silent on the matter.

Does it have anything to do with Rhaegar's prophecy?

Presumably not. We still do not know if Rhaegar had full access to the prophecy or understood it properly. He was mistaken about it twice. First he thought he was the Prince that was promised. Then he thought it was his son Aegon. He was wrong the both times. Besides, as Tyrion says, a Prophecy is like a half trained mule, once you start trusting it, it will kick you in the head.

It is very unlikely that Aegon, Visenya and Rhaenys, who just improvised with a sigil out of political needs, read extensively on prophecies and made their sigil according to one, which did not necessarily talk about Valyrians or the Targaryens. Unlike the three conquerors, Rhaegar was so obsessed with books that people used to joke that the Queen must have swallowed some books and candles when she was pregnant with him. The same was never said about the three conquerors.

34
What is the reason/significance of a lion as Lannister house sigil?
18
What is the historical origin of a “Silver Stag”? Why do Golden dragons remain in circulation after Robert's Rebellion?
8
To what do the Great Houses of Westeros owe their longevity?
10
What seal does Petyr Baelish (Littlefinger) use for his letters?
9
Which dragons survived the Dance of the Dragons?
4
Which female line was Olenna Tyrell talking about?
7
What is the kill score of all dragons and dragon-riders during the Dance of the Dragons?
3
Why doesn't the king/queen sue for peace ? (spoilers for GOT up to S07E04)
10
How old are Danaerys's dragons?
15
Which known Targaryens had personal coat of arms in addition to the three headed dragon of House Targaryen?