When and where was the name "Kal-El" first used?

When and where was the name Kal-El first used?

I know Jor-El (formerly Jor-L) was in the earlier prints. But, when was the name "Kal-El" first used/created to designate Superman?

It's already in the earliest newspaper comics from 1939, though back then it's "Kal-L":

According to this site:

This is the extended origin of Superman story which was told only in the daily newspaper comics in 1939 (about a year after Action Comics #1)! This tale has never appeared in a comic magazine!

"Kal-L" isn't mentioned in Action Comics #1, but I don't know if that name appears in any of the later issues.

WRT the name-change from "L" to "El", Wikipedia says:

The earliest newspaper strips name the planet "Krypton", the baby "Kal-L", and his biological parents "Jor-L" and "Lora"; their names become "Jor-el", and "Lara" in a 1942 spinoff novel by George Lowther.

The entry doesn't provide a link to back this up, instead it refers to a 2014 book which points to a 1942 book as the source of the name-change:

Lowther, George (1942). The Adventures of Superman. Per Ricca (2014): "The book is also the first time that Superman's parents are named "Jor-el" and "Lara" — a slight spelling change that would stick."

The "per Ricca" refers to this:

It was Lowther who first provided many now-familiar details of Superman's birth and early life. The first two chapters provided the first detailed description of the planet Krypton, and renamed Kal-El's parents Jor-El and Lara who previously had been named Jor-L and Lora.

Note that the book actually spells it "Jor-el" (as you can see in the scan below), it would later change to "Jor-El" in the comic books. 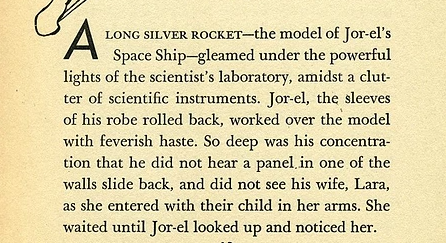 Not the answer you're looking for? Browse other questions tagged dc comics superman history-of or ask your own question.

16
Where was the fictional material "Unobtainium" first used?
14
Did Superman Ever Meet His Parents or See What Krypton was Really Like?
16
How Far Is Krypton From Earth? Do We Know Where It Is?
29
When was Superman's backstory and the fate of his parents revealed?
6
When Superman bleeds, does that mean he is killing the Kryptonian race?
11
Any comics or other media where Kara got to raise Kal-El as she was supposed to do?
3
Identifying a Superman Elseworlds comic where the Kyptonians take over Earth
7
How did Zod know Kal-El was on Earth?
2
Whose mother's name was known first?