Why do Northern houses see joining the Night's Watch as honorable while no one else does?

In A Song of Ice and Fire (and also in the series Game of Thrones), "taking the black" by joining the Night's Watch was generally considered to be a very honorable thing to do despite that, in current times, it's seen as a "last resort" for criminals and disinherited people. However, what strikes me as odd is that it seems that House Stark generally still sees joining the Night's Watch as honorable despite this.

The Starks and other Northern houses are educated and probably know more about the realities of life as a member than other families of Westeros do due to actually having a border with the Watch's lands: They've actually seen all that stuff rather than just hearing about it... so they are most definitely aware that it's a dumping ground for the dregs of society and not some noble cause like it may be portrayed as in legends. So, then, why do the Starks and other Northerners still consider joining the Night's Watch to be an honorable act while it seems that no one else in Westeros does? Is it just because members of the Stark house invested a lot in it throughout history (e.g. Bran the Builder) and they're reluctant to "give up" on it as a sort of psychological sunk-cost fallacy?

There is a long history to the Night's Watch, and the North remembers.

Thanks to the children, the first men of the Night's Watch banded together and were able to fight—and win—the Battle for the Dawn: the last battle that broke the endless winter and sent the Others fleeing to the icy north. Now, six thousand years later (or eight thousand as True History puts forward), the Wall made to defend the realms of men is still manned by the sworn brothers of the Night's Watch, and neither the Others nor the children have been seen in many centuries.

That [the Others] became monstrous in the tales told thereafter, according to Fomas, reflects the desire of the Night's Watch and the Starks to give themselves a more heroic identity as saviors of mankind, and not merely the beneficiaries of a struggle over dominion.
The World of Ice and Fire - Ancient History: The Long Night

The history of the Night's Watch is a long one. Tales still tell of the black knights of the Wall and their noble calling. But the Age of Heroes is long done, and the Others have not shown themselves in thousands of years, if indeed they ever existed.
The World of Ice and Fire - The Wall and Beyond: The Night’s Watch

The Starks and the North remember the history upon which the Night's Watch was born. A brotherhood sworn to protect everyone, regardless of allegiances from the forgotten terror that lies in the forgotten North.

She modeled their vows upon those of the Night's Watch, so that they would forfeit all things save their duty to the king.
The World of Ice and Fire - The Targaryen Kings: Aegon I

It was the North that was directly in line to get rekt by the Others, and the Nights Watch were the ones protecting them:

The northern boundary of the Stark domains was protected by the Wall and the men of the Night's Watch
The World of Ice and Fire - The North: The Kings of Winter

This point was extended in a tweet by Elio and Lindo @westerosorg: 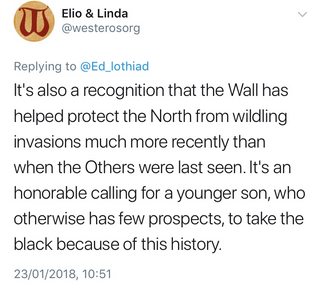 It's also a recognition that the wall has helped protect the North from wildling invasions much more recently than when the Others were last seen. It's an honorable (sic) calling for a younger son, who otherwise has few prospects, to take the black because of this history Tweet from @westerosorg

It is for the most part unclear why they honour it so, but just that they do.

Wildling raids may rightly be considered more of a nuisance than a menace; many wise men suggest that they might be better dealt with by allowing the lords of the North to extend their rule beyond the Wall so that they can drive the wildlings back.
Only the fact that the Northmen themselves greatly honor the Watch has kept it functioning, and a great part of the food that keeps the black brothers of Castle Black, the Shadow Tower, and Eastwatch-by-the-Sea from starving comes not from the Gift but from the yearly gifts these Northern lords deliver to the Wall in token of their support.
The World of Ice and Fire - The Wall and Beyond: The Night’s Watch

The extent to which it was deemed honourable in the days of old is remarked on by Jon, when discussing the Shieldhall. Where the old Shields of knights and nobleman who'd given up their Houses for the black would hang their shields, until their death,

The Shieldhall was one of the older parts of Castle Black, a long drafty feast hall of dark stone, its oaken rafters black with the smoke of centuries. Back when the Night's Watch had been much larger, its walls had been hung with rows of brightly colored wooden shields. Then as now, when a knight took the black, tradition decreed that he set aside his former arms and take up the plain black shield of the brotherhood. The shields thus discarded would hang in the Shieldhall.
Hundreds of knights meant hundreds of shields. Hawks and eagles, dragons and griffins, suns and stags, wolves and wyverns, manticores, ... , and a hundred other heraldic charges had adorned the Shieldhall walls, blazoned in more colors than any rainbow ever dreamed of.
But when a knight died, his shield was taken down, that it might go with him to his pyre or his tomb...
A Dance with Dragons: Jon XIII

The Southerners have long forgotten the threats of not only the Others, but of the Wildlings, they mostly consider it to be folk stories and old wives' tales. The Southron lords have only known the Northern realm to be their threat from the North (before Aegon's Landing) since the Night's Watch and the North had kept everything else at bay. This ignorance was, however, not always the case, as the description of the Shieldhall states, there were scores of houses once represented on the walls of the Hall.

The house range from all over the realm and are not only made up of those of the northerners.

55
Why did Benjen Stark take the Black?
33
Are there any real-life parallels to the Night's Watch and their fall from prestige?

38
How do Southern people discern Night's Watch deserters from truthful brothers sent south?
29
What were Bran and Rickon Stark supposed to do when they grew up?
38
Why are there Lords and Sers on The Wall?
11
Why didn't Robb Stark give Rickard Karstark the option to take the black?
5
Is there a common “curriculum” for children of noble houses in Westeros?
10
What is the place where Will was executed?
6
Why is the Night's Watch so depleted at the start of ASOIAF?