Book where planets are on different levels of development [duplicate]

Every few years or so, I go through this fruitless attempt to find a sci fi book we had for required reading in elementary school. I still have friends from back then and not one person can remember the name. I swear it was called "Journey to the Stars" but alas, nothing with that title is the correct book. I'm not even sure if it was a book or a novel; our teacher handed them out in laminated, bound form.

Anyway, the basic premise is: there are different planets and each planet in the galaxy is at a different stage.

In this story, a girl from the most advanced planet meets a boy from the technology planet and it's forbidden for them to be friends. I wanna say the girls name is Alanna/Alana and the boy is Jordan? I could be completely off on the names though. Does anyone have any idea what I'm talking about?

I am almost certain that you are thinking of Enchantress from the Stars, by Sylvia Engdahl. I linked the book title to the novel's Wikipedia entry, which tells me it was once a runner-up for the Newbery Medal after it was published in 1970. (Several years earlier, A Wrinkle in Time had won that medal.) That could explain how it came to the attention of a schoolteacher as a superior piece of literature for young people to study -- although I'm a bit surprised that you say it was required reading in "elementary school." (When I was a kid, I think "elementary school" only meant "First through Fourth Grades" -- at least in my local school district -- and this book seems to be pitched at an audience a bit older than that.)

Personally, I believe I checked out a copy from a junior high school library, back in the 1980s. And I believe I reread it some years later. I shall list some similarities between portions of your description from memory, and what I remembered myself and/or can confirm from looking at such things as the sample pages which are available on Amazon for this book.

The girl who narrates portions of the book is named Elana. The woodcutter's son whom she encounters, and is very attracted to, is named Georyn. If we assume that the "Geor" part is pronounced with a J-sound, as in the name "George," then the names of these youngsters would sound very similar to "Alana" and "Jordan." (This, for me, is the main thing that makes me think we're almost certainly talking about the same book, as opposed to the possibility of different Young Adult science fiction novels with similar premises.)

I don't have a copy of the novel, but I remember something similar, and I know (with confirmation from online summaries and reviews) that Georyn, one of the viewpoint characters, lives on a world which appears (at least in the part of it he knows) to strongly resemble Medieval England.

Another viewpoint character, Assistant Medical Officer Jarel, comes from a world which seems to be at least a century or two ahead of where we were in the mid-20th Century; his culture has reached the point of having interstellar travel. Most of its people feeling morally justified in regarding any humanoid inhabitants of more primitive worlds as being fundamentally inferior, meant to be conquered by their betters. Jarel has some serious doubts about the morality of this approach, but he doesn't get to make policy.

Elana comes from one of those worlds. Her civilization is called "The Federation," and it keeps a watchful eye on the "Youngling" (less developed) humanoid cultures which it encounters. (The resemblance to Star Trek's "Federation" may be coincidental; the Wikipedia entry says that Engdahl wrote portions of this novel in the 1950s, although it was not published until 1970.)

Elana is the only one whose viewpoint chapters are written in the first person. Here's a sample passage, from early in the book, to illustrate how she matches up with your recollection:

All my life I've wanted a career in the Anthropological Service; I've lived and breathed it ever since I was old enough to know what a Youngling world is. Of course it's natural, in my case, since besides my parents being Service people my grandfather and grandmother -- Mother's parents, with whom I lived most of my childhood -- are both retired field agents. But even for someone with my background, the Academy is not easy to get into. The stories you hear about the entrance tests being such an awful ordeal are true. They're carefully designed to be, because you're not meant to pass unless you want to pretty desperately. It's not just a matter of being smart -- though you do have to be, of course -- or of having high aptitude for the control of psychic powers like psychokinesis and the

(Sorry I had to cut it off there, but that's where Amazon cuts off that passage!)

Well, she meets both Georyn from the "medieval" planet, and Jarel from the invading starfaring culture. In both cases, she is not allowed to "blow her cover" by letting them know she is from another world. Georyn, however, is far more appealing to her than Jarel, as I recall. I think because he's so innocent and sincere and courageous despite not really understanding what is going on. (Also, he thinks she's adorable, and since she's telepathic, she's bound to be flattered by that when she sees it in his mind.)

In Georyn's case, the plan is to have Elana masquerade as an "Enchantress" who gives Georyn some help in doing things which will discourage the invading ship that has already landed some miles away to begin a scientific study of the inhabitants, etc., and report back to headquarters on the feasibility of all-out conquest. Since Georyn's people still believe in "magic spells" and "dragons" and so forth, it appears that Elana can demonstrate odd abilities to him without causing any huge "culture shock" such as: "Gasp! I never imagined anyone could do that! You must be a demon, or an Advanced Alien, or something!"

In Jarel's case, there is a sequence in which Elana simply dresses up as a typical "local girl" who is captured for scientific study. I forget why this was necessary, but I seem to recall that it was all part of a clever plan. In both cases, her culture had a rule (more-or-less what Star Trek would call "the Prime Directive") which said it was utterly forbidden to let anyone from a "Youngling" world have any cause to suspect "there are humans on other planets who are far more advanced than your people are, and they are spying on you right now!" So Elana's desire to prevent Planet A from invading Planet B is handicapped by the need for secrecy -- her people would not overtly interfere by having a battle fleet suddenly pop up and warn the Planet A people to back off if they knew what was good for 'em.

And since Elana is not allowed to be honest with either of those guys regarding her origins, any marriage with Georyn would be absolutely out of the question. (Although she feels tempted, despite already being pretty much engaged to another young man from her own culture.)

A cute thing about this novel was that when I first read it, I could see how any of the three cultures involved might be our own Planet Earth, at some point in time. Hundreds of years in the past, or a couple of centuries in the future, or many centuries in the future. There was nothing specific (such as names of cities or nations in Georyn's world, for instance) which squarely proved or disproved any of those three possible interpretations.

A little Googling tells me that several different designs have been used for artwork on different editions of the book, but just for the heck of it I'll include what looks like it may well the oldest one (from 1970, if I'm right). It may or may not ring any bells in your memory. 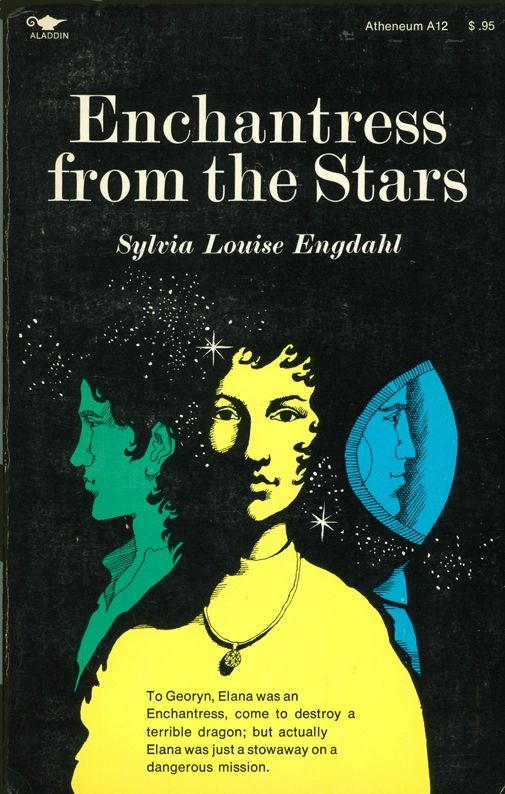