Are there any other DC characters mentioned in the Watchmen universe (prior to the Doomsday Clock crossover)?

In the movie Watchmen (2009), we can see posters of Batman during the credit sequence in beginning and 'Superman' was also mentioned during the flashback scene of Dr. Manhattan which suggests that the DC characters do exist in the film Watchmen universe as fictional comicbook characters.

Are there any DC characters ever mentioned in the comic-book version (prior to the Doomsday Clock crossover comics)?

The world of Doc Savage and The Shadow was one of absolute values, where what was good was never in the slight- est doubt and where what was evil inevitably suffered some fit- ting punishment.

Action Comics #1 also gets a mention. Note that Superman, Zatara, Doc Savage and the Shadow are all explicitly called out as examples of fictional superheroes whose star waned once there were stories about real superheroes like Ozymandias and Captain Metropolis.

For me, it all started in 1938, the year when they invented the super-hero. I was too old for comic books when the first issue of ACTION COMICS came out, or at least too old to read them in public without souring my promotion chances, but I noticed a lot of the little kids on my beat reading it and couldn’t resist asking one of them if I could glance through it. I figured if anybody saw me I could put it all down to keeping a good relationship with the youth of the community.

I’d never been entirely sure what Lamont Cranston was up to with Margo Lane, but I’d bet it was nowhere near as innocent and wholesome as Clark Kent’s relationship with her namesake Lois. Of course, all of these old Characters are gone and forgotten now, but I’m willing to bet that there are at least a few older readers out there who will remember enough to know what I’m talking about. 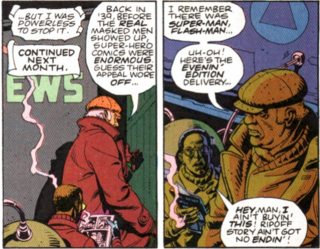 Mr Spock gets a mention in Watchmen #9. 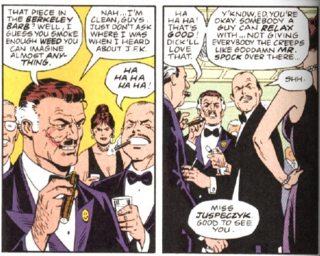 Not the answer you're looking for? Browse other questions tagged dc watchmen watchmen-2009 or ask your own question.

24
Is there any information about what Alan Moore had in mind for expanding the Watchmen franchise?
10
Was Smallville (the show) ever considered canon in the DC universe
7
Is there a way to relate each of the characters in Moore's Watchmen to the inset "Tales of the Black Freighter"?
6
Did any DC comics live-action adaptations cross over before The Flash?
15
Is there any info about after Watchmen?
7
Are there any other villains (aside from Doomsday) who've killed Superman?
49
How does Batman fit into the timeline of Watchmen?
1
Are there Kryptonians on Prime Earth and does/did New Krypton exist there?
8
Is there an in-universe explanation for the American flag in HBO's series Watchmen?
4
Are we supposed to have some universe knowledge before watching HBO Watchmen?