How did Guru Pathik get in air temple without flying bison?

How did he manage to go there when you should have a flying bison to go there?

In the wiki page for Pathik they said:

Pathik took up residence in the Eastern Air Temple. Many years prior to Aang's liberation from the iceberg, he experienced a vision of one day helping the Avatar.

Guru Pathik himself said to Appa:

I have been expecting you and the young avatar for quite a long time. I had a vision many years a go of helping him. That's why I came to the Eastern air temple.

So that means he wasn't there all his time.

And Avatar Aang himself says:

You don't understand Katara. The only way to get to the Airbender temple is on Flying bison, and I doubt the Fire nation has any flying bison.

You don't understand Katara. The only way to get to the Airbender temple is on Flying bison, and I doubt the Fire nation has any flying bison

However, its population was wiped out during the Air Nomad Genocide in 0 AG

So how did Guru Pathik get there? We don't know for sure but we know the place is scaleable to non-Air Benders as shown in The Legend of Korra Book 2 - Spirits when Tenzen, Kya and Bumi are looking for Ikki after she runs away. While Tenzen is an Air Bender and Kya a Water Bender Bumi isn't a Bender and the 3 were going down the paths outside the main temple grounds long into the night as Ikki was found the following morning in a cave so it would suggest they were going down for a good while.

Also despite it being Aang's home neither he nor Tenzen knew about the Meditation circle:

The meditation circle is located some distance from the main temple. The area was not known by the Air Acolytes, and due to its neglect, there was an overgrowth of vegetation and reduced spiritual connections.

And in the Trivia's 3rd point:

Along with the other three ancient air temples, the Eastern Air Temple was restored to its former glory by Avatar Aang

Yet as quoted above the circle was neglected, needed cleansing and it took Jinora leading the group (who was being led by dragonfly bunny spirits) to find it as it would have been Tenzen's first choice of mediation spot when he was training Korra.

Also finally we see in a flashback the Eastern Air Temple in flames: 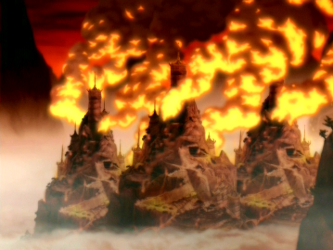 And while not entirely clear I would say that the positions of where the fire is coming out from and the lack of smaller fires further down would suggest more that the Fire Nation got into the temple themselves.

Also as Ellesedil as pointed out in the comments, there is also the Northern Air Temple which during the events of The Last Airbender Book 1 Episode 17 "The Northern Air Temple" where a group of Non-Benders (particularly Earth Kingdom Refugees) who, without flying bison, was able to take up residence and even got into the Air temple sanctuary which was supposed to only be unlockable by a master Air Bender.

During the episode we also see the Fire Nation attacks the temple with a combination of foot soldiers and Tundra tanks1 and we see that the foot soldiers don't have too much of a problem climbing the slopes as such, just as Ellesedil said "Presumably, climbing is always an option"

This shows us that Aang's comment was just optimism as he doesn't know everything about the Western Air Temple and what happened there.

Also given the amount of time that passed between Aang first revisiting the temple in Book 1 to Appa appearing their after he was separated having been kidnapped by the Sand Benders, it's not out of the realm of possibility that Guru Pathik found some out of the way path that allowed him to scale the mountains into the temple, is not the same path used by the Fire Nation when they killed the Air Benders, if not having climbed himself.

1: The wikia page says the tanks were created in the late stages of the Hundred Year War. Since it was Air Nomad Genocide which actually sparked the War (it was this event which lead the Water Tribes and Earth Kingdom to declare war against the Fire Nation) we can assume that these tanks were never used to siege the Temples.

In the first Kyoshi novel (Avatar, The Last Airbender: The Rise Of Kyoshi) Avatar Kyoshi hikes up to one of the air temples with a group of non-benders that were about to take refuge at the temple. This show that there are trails up to the air temples accessible enough for just about anyone to enter.

Kyoshi had waited until her friends left before making her move, wanting to spare them of the chaos that would ensue after her unveiling. The Air Nomads often accepted pilgrims from the other nations, letting them stay at the monasteries and nunneries on a temporary basis. With Jianzhu no longer darkening her life, she simply joined a group of ragged travelers hiking up the mountain to the Southern Air Temple.

I would suggest the possibility that Aang was more thinking of in mass groups. If we think about this realistically, there is a huge difference between what one person can do with enough effort and a large group can do. The larger size of a group causes specific problems with getting people all at once so they might have required air bisons for that but as pointed out by other climbing and scalling could be done on a solo trip. To be hoenst as well compared with the other temples it also seems like the most easiest to get to so it is also no wonder both guru and the fire nationw were able to get to it especially when we compare it to ones like the literally upside down western temple

29
Where did Tenzin get a Flying Bison?
18
How did Avatar Aang have a wife and kids?
15
In the Avatar world, what exactly are they bending?
5
Why were the Air Nomads against the concept of hope?
34
Where do Airbender babies come from?
8
Why did the guru tell Aang he needs to stop feeling "earthly attachments" to enter the Avatar State?
5
Avatar: How could Toph see earth that was flying in air
5
What nationality was Guru Pathik (from a biological perspective)?
7
What happened to the Flying Lemurs in Legend of Korra?