I remember this novel's plot in some detail, but nothing about the author, the title, or the character names. I believe this book was already on the shelves of a public library in Indiana in the mid-1980s, and I reread it roughly a decade later (when I found it in another library). I'm sure the book was a self-contained story with no signs of being part of any larger series. I'm sure it was written in English, and almost sure it was not written by any well-known, prolific SF author of the 20th Century. (Definitely not any of the ones whose works I tend to collect and reread for fun, such as Heinlein, Asimov, Dickson, Zelazny, etc.)

Does anyone think this sounds familiar? I recognize that the basic concept of "a fellow from our era, or our near future, suddenly finds himself in a strange and scary distant future where things have regressed" is not exactly the most original plot premise in the history of science fiction. But for some reason I feel mildly interested in pinning down who wrote this particular version of that trope. I didn't fall madly in love with the book the first or second times I read it, but it might be interesting to learn what else this particular author turned out (if anything), and give it a fair chance to impress me if I haven't read it before.

This is Phoenix, by Richard Cowper. There's the suspended animation facility referred to in point 3, the Caves of Sleep. The bit at the end with the circle is what I remember most clearly, corresponding to point 13, and it's that which made me think it was the same book. Google Books doesn't have that scene, but the character names were familiar enough to convince me.

"He was from the decadent past -- and there was no place for him in this primitive future..." 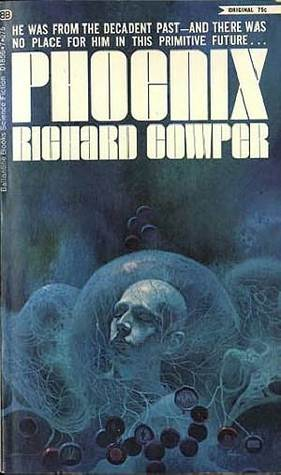 Not the answer you're looking for? Browse other questions tagged story-identification novel post-apocalyptic cryogenics or ask your own question.

9
Children's Science Fiction Novel: girl from future visits ancient humans, boy believes she is a magical spirit
9
Science fiction novel about a man who travels through time and falls in love with a warrior woman
16
Science fiction novel about an assassin's guild that claims to be apolitical (while doing the local tyrant's dirty work)
18
Science fiction story about an intelligent man put in suspended animation to solve future problems
9
Science Fiction Novel with the Word Diamond in the Title
6
Fantasy quest novel where the music magic hero doesn't get the girl