Book with Man Conquering Cities, Settling with Wife, and Returning to Face a Copycat Villain

So from what I remember of the plot, there is a guy conquering a bunch of cities with a group of mercenaries. At the final city he meets with the daughter of the king/mayor to negotiate a surrender, but he ends up disappearing with her, never to be heard of again.

Years later, he ended up marrying her and is living a normal life. Something happens and he somehow finds out someone is doing the same thing he did 10 years ago. For some reason, he decides he has to stop them and to do that he has to get the crew back together.

He goes around getting the group back together (there are at least 5 of them) to stop this villain. They end up saving that city and it turns out that the villain trying to conquer the city is the hero’s wife’s brother.

The only other details I remember are I think he has a ring that a demon lives in, and one of the mercenaries he gets to come along with him is an ogre/giant who turned into a farmer.

The Conqueror's Shadow published in 2010 by Ari Marmell, which is a bit later than you said, but otherwise matches on all counts. 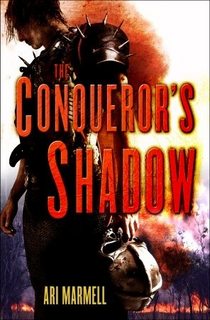 They called him the Terror of the East. His past shrouded in mystery, his identity hidden beneath a suit of enchanted black armor and a skull-like helm, Corvis Rebaine carved a bloody path through Imphallion, aided by Davro, a savage ogre, and Seilloah, a witch with a taste for human flesh. No shield or weapon could stop his demon-forged axe. And no magic could match the spells of his demon slave, Khanda.

Yet just when ultimate victory was in his grasp, Rebaine faltered. His plans of conquest, born from a desire to see Imphallion governed with firmness and honesty, shattered. Amid the chaos of a collapsing army, Rebaine vanished, taking only a single hostage—the young noblewoman Tyannon—to guarantee his escape.

Seventeen years later, Rebaine and Tyannon are married, living in obscurity and raising their children, a daughter and a son. Rebaine has put his past behind him, given up his dreams of conquest. Not even news of Audriss—an upstart warlord following Rebaine’s old path of conquest—can stir the retired warrior to action.

Until his daughter is assaulted by Audriss’s goons.

Now, to rescue the country he once tried to conquer, Rebaine once more dons the armor of the Terror of the East and seeks out his former allies. But Davro has become a peaceful farmer. Seilloah has no wish to leave her haunted forest home. And Khanda . . . well, to describe his feelings for his former master as undying hatred would be an understatement.

It came up with my search for fantasy novel conquering mercenary copycat. It has the former warlord with a demon slave who retired after marrying one of his conquests. Another warlord is doing what he was doing before and he gets the gang back together, one of which had become a farmer.

And from what I can tell, doing searches, Corvis thinks that Audriss is his brother-in-law, but it's a red herring.

18
Looking for a book series about a girl and her friends captured and sold as slaves
5
Identify fantasy series with people having traits of different animals
5
Can't remember fantasy novel with magic and technology mixed, search for elemental shards/crystals
17
Boy has to defeat supernatural demon, modern setting
5
1980s fantasy cartoon, heroes go in an underground realm and free the oppressed locals, after three trials (man-eating passage, spider people, dragon)
6
Book about a man who crashes on a planet and saves the princess with a magical weapon
11
Old anime I saw about 15 years ago with transforming characters
5
Book about a demon and spooky stuff investigator with a musical instrument