Did Vader actually die in the original Star Wars movie, now known as A New Hope?

I know it was changed quickly to make him available for the sequel, but I saw the movie three times in the weeks after its premiere and Darth Vader definitely died in the trench, bumping into his wing-man after Han Solo kills the second wing-man. This fact seems to have been expunged from the Internet.

Was the plot to the original Star Wars movie changed as I remember? Is there any video evidence?

Vader's death wasn't canonically confirmed in the film, nor in the original novelisation which was released several weeks before the film came out (and which, in turn is based on the final draft shooting script).

When we last see him (in both the film and the novel) he's blasting off into deep space.

To the other side, Darth Vader’s fighter began spinning helplessly. Unimpressed by the Dark Lord’s desperate glower, various controls and instruments gave back readings which were brutally truthful. Completely out of control, the tiny ship continued spinning in the opposite direction from the destroyed wingman—out into the endless reaches of deep space.

Purely for your interest the last draft script in which he died was the 2nd draft (which, incidentally is the first in which he appears).

He survived in the 4th Draft

CU. Vader. The impact of the collision throws Vader out of control and creates havoc on his control board. He looks around frantically trying to salvage his situation. 237. EXT. SPACE AROUND THE DEATH STAR: Full Shot of Vader’s ship spinning out of control with a bent solar fin, heading for deep space.

He survived (probably) in the 3rd Draft

Vader’s starship with a bent solar fin limps into the vast darkness of space attempting to make it back to the relative safety of Alderaan.

Vader’s starship swoops down on the battered pirate ship, unleashing a heavy barrage of laser bolts. Chewbacca in the rear gun turret blazes away at the Sith starship. One of Vader’s huge solar fins breaks up, but the Black Knight manages to keep the disabled craft on course and crash dives into the pirate craft, exploding on impact.

I've got a copy of the 1977 silver screen version: it's got no "Episode IV" in the opening crawl, and Han shoots first. At the end, after the Death Star has exploded and we hear the ghost of Ben say "The Force will be with you ... always", we see a couple of shots in which Vader's fighter stops spinning and heads off into space. We don't see him get rescued, but his survival is obviously being flagged up for us.

I also recall seeing that scene when I first saw the film, but that was a long time ago, in cinema far far away.

While Darth Vader was not explicitly dead at the end of the original 1977 Star Wars, the initial film left his ultimate fate open to interpretation.

FWIW, I saw Star Wars in 1977 when I was 9 years old at the Loews Astor Plaza in NYC; one of the main theaters showing the film at the time.

The idea of sequels wasn’t a complete given back then. I mean there was The Planet of the Apes series, but not much else at the time. So in the immediate year or two that followed the release of Star Wars there was basically nothing else but the original 1977 film to be nostalgic for… As well as the tons of books, comics and other stuff that came out to cash in on the craze.

And while I don’t distinctly recall Darth Vader dying in the original 1977 release of the film, I remember the question of whether Darth Vader was alive or dead at the end of the film was definitely a topic of discussion. So much so that ephemera such as this “Darth Vadar Lives” button by Facets Etc. even existed: 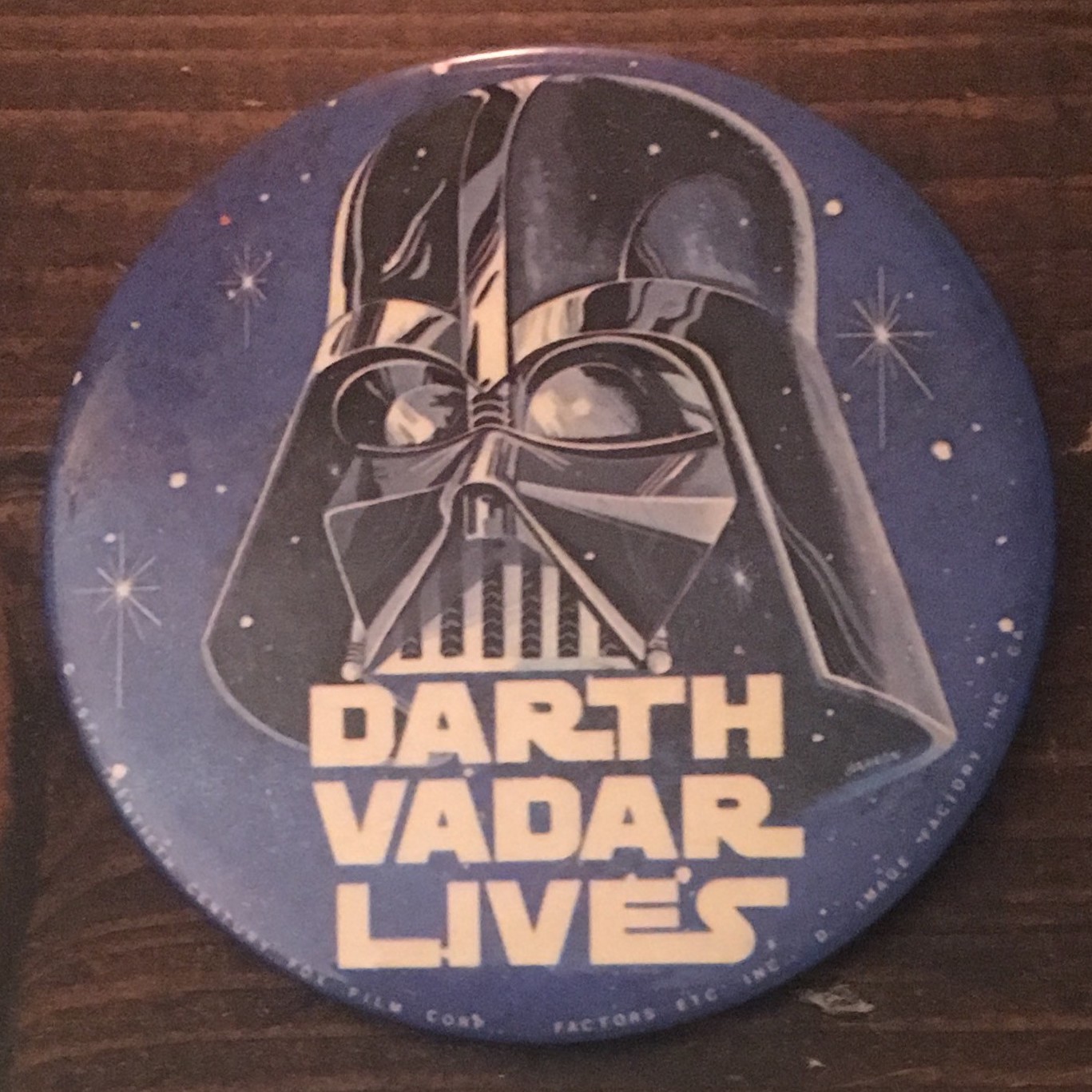 There was also an iron-on version of the artwork on this button as well that could be put on a t-shirt. So while the fate of Darth Vader by the end of the film was not 100% clear at the time, the possibility that he died in the Death Star battle was quite high at the time. Why else would an official collectable item declaring him to be alive even exist?

And — this is more of a personal side note — but I remember first seeing The Empire Strikes Back (1980) when it came out and the scene at the beginning — where the Imperial fleet was slowly assembling on screen — was accentuated by the first reveal of Darth Vader on the bridge of the Executor. The audience genuinely cheered and gasped. The reveal was intense and dramatic in and of itself, but the fact that Darth Vader was back really set the tone for the film… You just knew this guy is going to be a really bad-ass villain during the whole film.

No. I saw “Star Wars” (later called “Star Wars Episode IV: A New Hope”) in a movie theater1, maybe not on opening day, but in the first few weeks of its theatrical release. I distinctly recall telling a friend, “They’re leaving wiggle room for a sequel”, because Vader’s fighter stabilized (after briefly spinning out of control) and allowed him to fly away. This, of course, was before I knew anything about Lucas’s plan to make nine movies.

In hindsight, one might wonder how far he could get in such a small (one-person) vessel that was (probably) not designed for long-range travel.  On the other hand,

1 Actually multiple theaters, because I saw it a few times.

No. I remembered Vader dying too, the first time I saw the film. But I watched it again later—the same actual print, shown again in the same place just a few days later—and I was wrong. I think I was just so caught up in the excitement of the climax that I didn't even notice the scenes of Vader escaping.

Darth Vader dies in the original Star Wars release. I remember that just after a few weeks the movie was changed with a short image of Darth Vader stabilizing his craft so that he might have lived. Then there was a huge marketing campaign with signs and T-shirts that said "Darth Vader Lives".

Think about it. Without a sequel, the movie would be incomplete without Darth Vader dying. The bad guy had not yet been beat.

A shot from Han Solo damaged his craft and it spun out of control and hit the Death Star leaving Luke free to destroy the Death Star.

Not the answer you're looking for? Browse other questions tagged star-wars a-new-hope darth-vader retcon or ask your own question.

26
Why was the Death Star's tractor beam not used as a weapon during the battles?
40
Star Wars scene where Luke Skywalker witnesses battle above Tatooine?
5
Was Grand Moff Tarkin under Darth Vader's control?

55
Why were the Imperials rude to Vader in the beginning of A New Hope?
6
Is there evidence that Lucas intentionally introduced similarities between Episodes I and IV?
1
How did Luke get his lightsaber back after A New Hope?
7
Fighter cover during Death Star trench run
16
Is the Leigh Brackett first draft of the script for Star Wars episode 5 available?
6
Why aren't tractor beams used more commonly in the Star Wars universe?
11
Why didn't Han Solo shoot Darth Vader's ship?
5
When did Vader find Ahsoka's lightsaber?
10
Whose idea was it originally to capture Solo and use him as a bait to trap Luke?