I read a book as a teen, and I can't remember the name. It was about a disease of some kind that turned people into stone. Regular doctors couldn't find a cure, but there was a secret path (hidden in road signs) that led to a group of people who'd figured out a way to make victims into fully functioning, indestructible people. As best I can recall, it was called something like "The Hidden Highway" Any help is appreciated.

This is Highways in Hiding by George O. Smith.

The novel concerns ESP and a disease that turns men into supermen. It contains multiple plotlines concerning the interactions of people that can sense things (espers) and people that can read thoughts (telepaths). This is set against the plot of a secret society that is harboring people that are infected with a spaceborne illness called Mekstrom's Disease. The disease is the point on which the plot turns. People get infected and it slowly turns them into a sort of rock. The hardening begins at one of the extremities such as a finger or toe and slowly begins to creep up the infected limb. Eventually all the extremities are hardening and the disease makes its way to the body proper. At this point, the body is hardened until the vitals fail and the patient dies. The plot turns on a secret society that has found a cure for the infected. To hide themselves from the public at large they have devised a hidden highway program that leads the infected to "Mekstrom safehouses" of sorts. 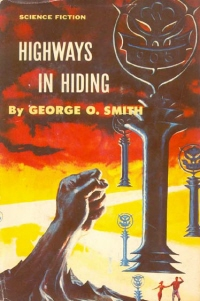