What did Snoke mean when he said that Kylo Ren was "unbalanced"?

During the speech when he's chastising and demoralizing Kylo, Snoke says that he is immature. I'm not sure of the exact wording, but he definitely uses the term "unbalanced" to describe Kylo. He says that he was hoping for a new Vader, but that Kylo is weak and unbalanced.

does he mean that Kylo is unbalanced in the Force, somehow having an inner discord between the Light and the Dark?

That seems to be the implication. While there's no quotes yet, in this same scene, Snoke makes a direct reference to how he thought Kylo Ren could live up to Darth Vader's reputation as a renown Sith lord, and how he's been a disappointment in that regard. In fact, Snoke goes so far as to say he was mistaken about that.

Shortly thereafter Kylo Ren's helmet and the elevator have an "accident". 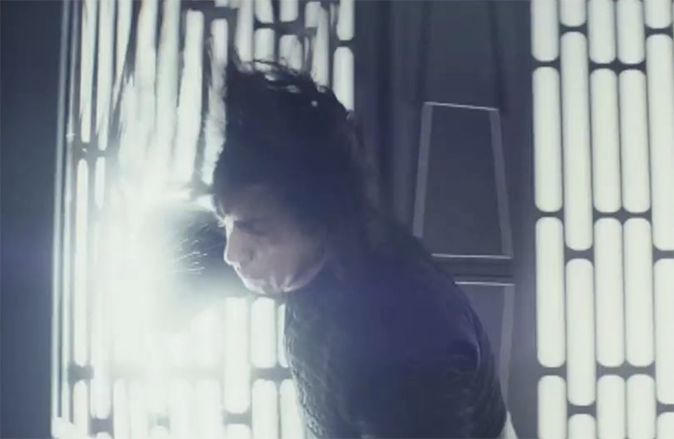 he provoked Kylo Ren so he would be in a better position to be linked to Rey through the Force, and thus lure her to him. Snoke promptly recants his earlier dismissal upon seeing Kylo Ren's success, thinking that Kylo Ren will now kill Rey for him.

The assertion that Kylo Ren was insane doesn't make any sense in this regard. Sure, he's prone to destroying things in fits of rage (we're 2 for 2 in Kylo Ren movie rage-fests) but remember, the Dark Side thrives on fear and anger/hatred. Stirring the anger in Kylo Ren up is in keeping with the Emperor trying to do that to Luke in ROTJ

And let's not forget this scene in The Force Awakens, where Kylo Ren is asking Darth Vader to help him learn how to extinguish the light within him (where he notes that Snoke senses it)

It might mean that Kylo Ren tends to swing from one side of the Force to the other, for example him helping Rey defeat the Elite Praetorian Guards, compared to his rage fits.

This may also mean that he has too much compassion in him, not being able to kill his mother Leia, compared to Vader who killed Ben Kenobi without hesitation.

Kylo Ren is basically just an emo kid with fits of rage.

This is especially true for Episode VII, in Episode VIII he grows up a little towards the end, and is more calculate, cold and deliberate. But up to a point where Snoke criticized him, he was really immature, venting his frustrations on equipment and/or people around him with no good rational reason.

Note that emotional outbursts are sign of weakness for Dark Side users, although they use hate and rage to fuel their powers. But they should control their emotions, not be controlled by them . For example, Palpatine almost never got carried away by his feelings, and once he did (torturing Luke) he was killed. Same could be said for Snoke. Vader himself, idolized by Kylo, had some outbursts at beginning of his career, and that cost him arm and a leg (literally :) ) . Later, he was completely cold even when he punished his subordinates. Maul, formerly Darth, lost a fight and his life when he allowed Kenobi to anger him ("And what do you have ?") .

Note one more thing about Kylo, he was mimicking Darth Vader with his helmet. Unlike Vader, he has no real purpose for it, and other Dark Side users did not hide their faces without reason. His helmet was instead symbol of him not accepting himself, another sign of immaturity. Once he got rid of it things stared to progress for him.

Not the answer you're looking for? Browse other questions tagged star-wars the-last-jedi kylo-ren snoke or ask your own question.