Asgard (the planet) is flat! So, is it natural or artificial?

As can be clearly seen in the following picture, Asgard is surprisingly flat!

However, basic physics tells us that due to gravity, surface tension and rotation around their axes, planets found in nature are actually oblate spheroids (=spheres squeezed a bit on the poles). This clearly suggests Asgard is probably artificial either via advanced technology or magic (the Odinforce?) or both.

Do we know if Asgard is natural or artificial?

I'm only interested in the history (creation?) of Asgard from an in universe point of view and answers from both the MCU and the comics will be accepted, but no flat-Earth jokes please...

The official Marvel site (archived) indicates that Asgard's peculiarities have not been explained:

Asgard is a small planetary body that serves as home to the Norse gods such as Thor, and their ruler, Odin. It exists in another dimensional plane and is about the size of the United States. It is not round like the Earth, does not spin on its axis, and does not revolve around the sun. It is a flat, asteroid-like mass that has a top surface with a gravitational pull, similar to that of the Earth’s, in order to keep the citizens and their cities from floating into the void. The matter on Asgard is also denser and more durable than the matter on Earth. There is an unknown force that keeps the surfaces of Asgard from eroding and from allowing its bodies of water from drifting off into space. Asgard has unknown intervals of day and night, it is unclear as to whether it uses Earth’s sun as a source of light, and there is no evidence that the seasons change.

While this does not explain the origin of the strange planetoid, it does suggest that the answer to the posed question is completely unknown.

One origin does seem to be ruled out, however. While much of the Marvel cosmology surrounding Asgard is quite true to the Norse myths, those myths had many parts of the world, including Asgard and Midgard, formed from Ymir's corpse. However, this cannot be the case in Marvel, since Ymir has been quite alive at various points in comic continuity.

It's natural, but the laws of nature that govern its creation and existence are not the same as the ones that we are familiar with here on Midgard (Earth). And by "natural", I only mean it isn't artificial or constructed by any mortal being.

Asgard's moorings are rooted in Yggdrasil, the World Tree, and may not be visible from every image of Asgard or it's capital. The diagram below should give a general idea of how things are arranged though: 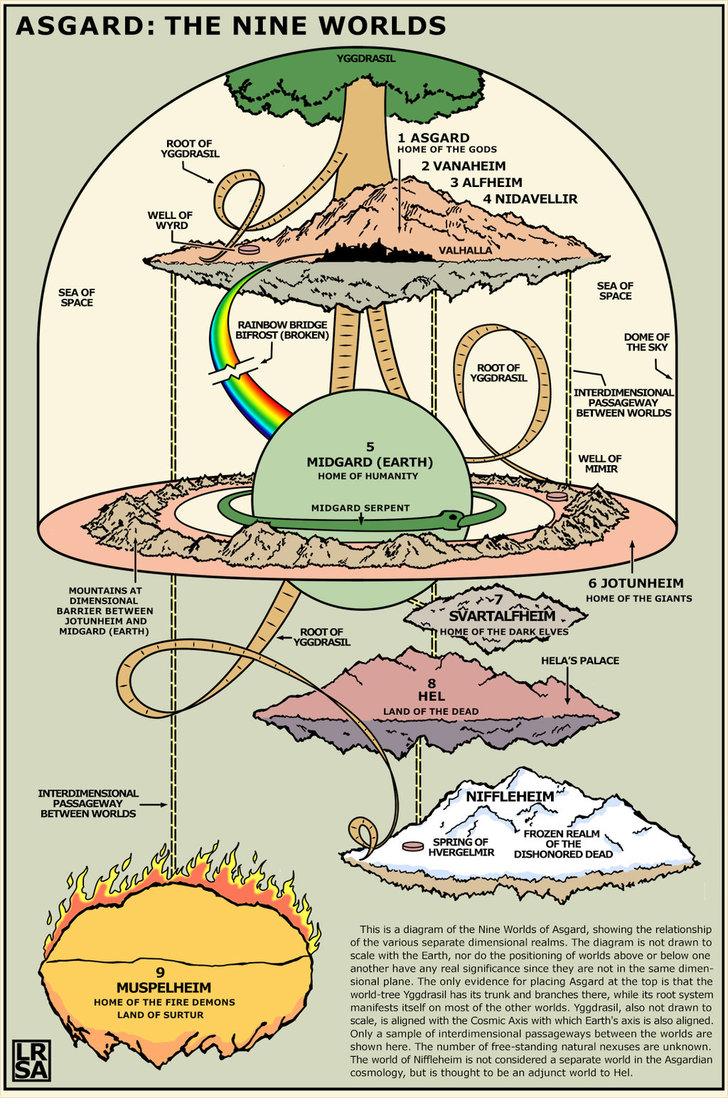 Yggdrasil itself provides enough stability for Asgard and the other realms contained within it to exist and for their own unique properties to persist.

Maybe it has a space station underneath its crust that's basically the planetoid's skeleton, or maybe if Odin did gather the Infinity Stones, he created Asgard from their collective power.

In the MCU, planetary physics do not apply. Take into account the time of Thanos’s snap. He is in Wakanda where the placement of the sun places it no more than 3 hours of high noon the same applies to (assume it's New York) in the Fury post credit scene. Again, in Ant-Man and the Wasp, the mid-credit “snap” occurs very near noon in San Francisco. Only one explanation. The MCU has a flat Earth, unless Wakanda is in the western hemisphere. While Uganda could be at sunset, and San Francisco at dawn at the same time (some months), a round Earth can’t explain the amount of daylight in each Earth location at “snap time”.

56
What's under the crystal bridge in Asgard?
8
Why didn't Thor take the sceptre back to Asgard?
32
In the Marvel universe, do we know how the Norse people discovered Thor, Odin, Asgard, etc
15
In Thor: Ragnarok, where were the mighty Asgard armies?
5
Did Loki actually let the Jotuns into Asgard?
25
How does the Bifrost still work after the destruction of Asgard?
3
Did Loki and Thor arrive at Asgard right after the Avengers?
21
Why is the New Asgard established at this place?