So I just saw Assignment: Earth again and, although I'm not a fan of Doctor Who, Gary Seven's pen-like multi instrument immediately reminded me of the Doctor's Sonic Screwdriver: 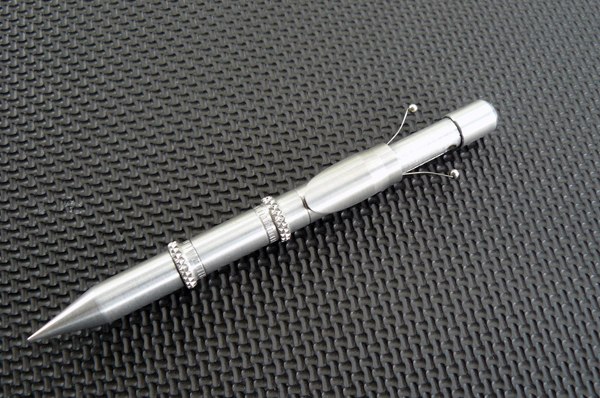 Among the things he uses it for:

I had dismissed it as coincidence, but then saw this note on Memory Alpha's talk page for the episode:

The device/weapon Seven wields looks awfully like Dr Who's "sonic screwdriver". Assignment: Earth aired March 29 1968; the sonic screwdriver made its first appearance in an episode of [of the Deep]: between March 16th 1968 and April 20th.

So, are the two items related or is it nothing more than a coincidence?

So I'm inclined to say that, if they're related, the Doctor was influenced by one of the two versions of Assignment: Earth. But that's why I'm asking for sources/quotes.

(Also note that Star Trek's The Squire of Gothos went only 10 days between first draft and filming, so the nearness of the dates isn't necessarily that good an indicator)

Did some research and both devices were introduced within days of each other. But neither team knew of the other or their productions. It's nothing more than an awesome coincidence.

Been doing some extra Googling ever since I posted this, since Thaddeus's answer really didn't satisfy me. Here's some of the things I'd found:

And finally, the thing that actually convinced me - the Sonic Screwdriver most likely came first, if not by name: "It is possible that the screwdriver had appeared before Fury from the Deep without the Doctor referring to it by that name: the prop used there appears to be one used by the Doctor in many earlier stories, including the First Doctor's sabotage of Dalek equipment as early as the second serial."

This doesn't discard the possibility of later influence, but given how different the Sonic Screwdriver was when it first appeared, the above is what's convinced me that their original conception was unrelated to each other.

It isn't at all impossible that both teams dreamed up this techno-wand for the same reason, both might use augmented waveformes , sonic or otherwise , to use a "random walk" type change in any apparatus to affect change, both British and American writers probably seized on this versatile concept in the development of their ideas

Not the answer you're looking for? Browse other questions tagged star-trek doctor-who star-trek-tos or ask your own question.